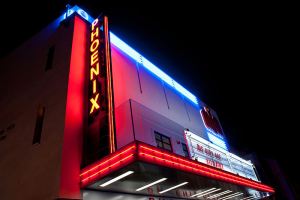 In 1909 laws to make cinemas safer were introduced. As a result, more purpose-built cinemas began to appear from 1910 onwards including this one. The Phoenix Cinema was built in 1910 by Premier Electric Theatres, however the company went bankrupt before the cinema could be opened. In 1912, the building was purchased by businessmen who had been involved in setting up East Sheen Picturedrome. They finally opened it as ‘The East Finchley Picturedrome’ in May 1912 with 428 seats.   Operating under various names over the years, it was recently restored in 2010.  This renovation celebrated the cinema’s centenary, and was led by the Phoenix Cinema Trust. This introduced a new cafe-bar with a balcony, reworked the external signage and foyer, and restored the auditorium’s barrel vaulted ceiling & Art Deco panels.  More information can be found at www.phoenixcinema.co.uk .  Also there is an interesting video at:  http://www.youtube.com/watch?v=pVwNXFvBlG4