Only once before have I posted a photo challenge, but while I never know if these will be easy or hard, here are a couple of interesting spots that live up to this website’s goal of showing you places in London ‘off the beaten path’ - and all three are central and easy to visit.  Go ahead and post a comment with your best answers - I’ll add the my answers in a few days. A hidden oasis of calm

(1)  Located in the heart of central London is this peaceful open space with an historic building that enhances the scenic view.  While centrally located it is not highly visited and you can often enjoy a picnic lunch here at one of the tables without any crowds. The building you see was funded by the estate of Thomas Sutton in 1611 who was from Newcastle and made his fortune in coal. At the time he was the wealthiest commoner in England.  Originally this land was a 14th Century plague pit, but it was developed over the centuries serving many functions.  Where are you? A most unique steeple

(2)  This church spire is arguably one of the most unique in all of London with its massive lions and unicorns.  This central London church was built as a result of the 1711 Order of Parliament to build 50 new churches, but is one of only six built by an incredibly famous architect (in fact this was his last church built in London).  Of particular note is that the artist William Hogarth illustrated the top of this spire in his famous engraving ‘Gin Lane’.  What church is this and who was the architect? 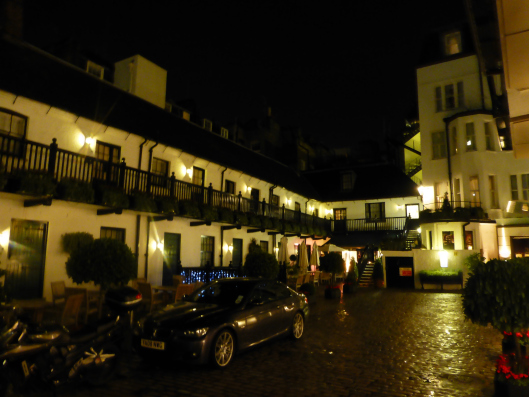 A carriage house from the 1600s

(3) This picturesque spot on a hidden cobbled courtyard evokes images of old London - especially at night - but is only a short stroll from some of the busiest parts of London.  With one of the few surviving central London carriage houses from the 1600s it is a real step back in time.  The owners claim the carriage house ‘housed the thoroughbred horses of London’s nobility’ - which is possible as King Henry VIII’s stables were nearby - but now it houses people with 17 rooms as an adjoining wing to a hotel.  This hotel, and especially its bar, were very popular with Americans in the early to mid-20th Century - and to a large degree still is today.  The restoration and redevelopment of this carriage house was actually done by Cunard cruise lines and most of its historical features and architecture has been retained.  Where am I?

20 thoughts on “A London photo challenge ~ three London landmarks ‘off the beaten path’.”