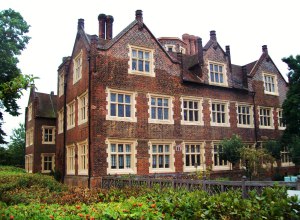 Eastbury Manor House was built during the reign of Elizabeth I, circa 1570.  After being the country house of gentry families for the earlier part of its history, by the 18th and 19th centuries Eastbury (sometimes known as Eastbury Hall) was inhabited by a succession of tenants such as yeoman farmers, butchers and graziers. They fattened cattle on the rich marshland pasture before selling them in the London markets.  The house gradually fell into decay. One of its two octagonal stair turrets was pulled down in the early 19th century, and one room was even used as a stable. It was in danger of complete demolition until 1918 when it was purchased by the National Trust.  In addition to visiting the house, a tea room is available.  Tours can also be candlelit at night, and murder mystery events are hosted there. Opening hours and cost of admission is on their website:  http://www.lbbd.gov.uk/MuseumsAndHeritage/EastburyManorHouse/Pages/Home2.aspx