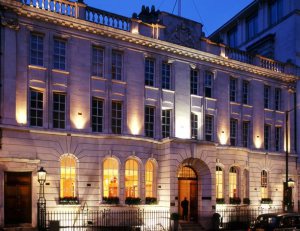 Across the street from Liberty’s is the ‘Courthouse Hotel’, so named as it was previously the Great Marlborough Street Magistrates Court.  Here you can drink cocktails in a police cell and dine in a courtroom.  You can retrace the footsteps of celebrity defendants like Mike Jagger and John Lennon, and see where Charles Dickens worked when he was a reporter.

History:  The court here was one of seven Public Offices established in London in 1792.  It was the only Metropolitan Police Court to remain on its original site until it closed in 1990.  The current building was built by noted police architect J.D. Butler in 1913.  This Court and Police Station handled a significant range of cases involving famous individuals in British history.  For some of the more interesting people and cases that went through these doors see the chronology below. 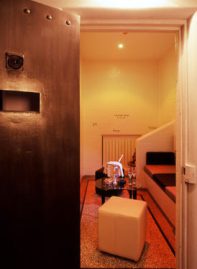 Prison Cell in the Bar

While a hotel today, much of the visual character of the courthouse has been

preserved.  For example inside the bar the old prison cells have been converted into semi-private VIP rooms to enjoy your drinks in.  In addition, their restaurant - Silk - occupies what was the main Court Room. Even the judges’ bench, dock and witness stand have all been retained and preserved.   Iron bars from the prison still separate the lobby lounge from the Bar. When it was operating as a court it was the second oldest magistrates court in the UK.  With these court related items still prevalent, original Robert Adams fireplaces in some of the suites, and period features throughout, the building is now Grade II listed.

Timeline:  When a Court, the following are some of the significant facts and dates:

1835: Charles Dickens worked here as  reporter there for the Morning Chronicle. 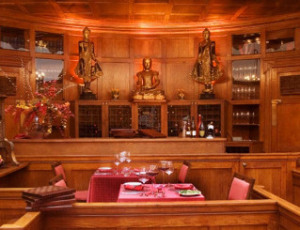 1895:  Oscar Wilde took the Marquess of Queensbury to court here on a criminal libel charge.

1970:  Case against John Lennon for exhibiting pictures which were too sexually explicit in the London Art Gallery dismissed.

1973:  Keith Richards appeared in Court and was fined £205 for possession of marijuana, heroin, a revolver and an antique shotgun.

1981:  John Miller, who masterminded the kidnap of Ronnie Biggs, appeared in court after being arrested on his return from the Carribean.

In years past the Thames river was much wider than it currently is, even containing numerous islands.  There are few places where one can visualize the width of the Thames in prior centuries, but within the Victoria Embankment Gardens is a stone structure that allows you to do just that - sitting almost 300 feet adrift from the Thames today.

History: A large estate was originally built in this location in the 13th century for the Bishops of Norwich.  It was confiscated by Henry VIII during the dissolution of the monasteries.  It was then granted to the Archbishop of York in the 15th Century and became known as York House.  The house was sold to George Villiers, the 1st Duke of Buckingham, in 1624.  The location on the Strand was exclusive as there were very few estates along this road connecting the City with Westminster.  Those estates located on the Thames side of the Strand naturally had access to the river.  Shortly after acquiring the property, the Duke built a ‘water-gate’ at the bottom of the property’s garden, on the bank of the Thames, to provide easier access to the property for travellers by boat.  This gateway is believed to have been built in 1626 by the Duke’s stonemason, Nicholas Stone, and some claim it was designed by architect Inigo Jones.  To either side of the gate are covered arches where people could wait for their boat.

The gate’s design is Italianate, similar to other designs built during the reign of King Charles I.  The Banqueting house, in nearby Whitehall ( see our post on this building http://londonunveiled.com/2012/06/28/banqueting-house/ for more information) is a grander period example of Inigo Jones’ s architectural works that also incorporates the Italianate design aesthetic. 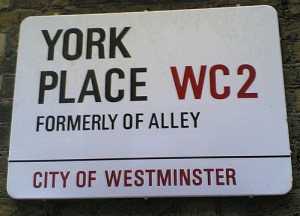 developers so that the Duke could raise capital to cover his debt obligations.  The only condition of sale was that when streets were laid out in the new development every part of his name and title (George Villiers, Duke of Buckingham) must be included in the street names.  In 1675, the house was demolished.  A new street plan was laid out on the property and the original streets were George St (now York Buildings), Villiers St, Duke St (now John Adam St), Of Alley (now York Place - but with the footnote on the sign ’Formerly Of Alley’) and Buckingham St.   At the south side of ths development is Watergate Walk where the stone Watergate is the only remaining structure from the York House era.  By the late 19th Century the gate had fallen into disrepair.  In 1893 the London County Council acquired the watergate so that it could be maintained for the public as part of the gardens.

The Thames Embankment:  In 1865 Joseph Bazalgette began construction of the northern Thames embankment, known as Victoria Embankment, to reclaim land from the Thames’ path.  Construction finished in 1870.  It also covers the then new sewer system for which Bazagette is also known.  The narrowing of the Thames meant that the York Watergate was now landlocked - almost 300 feet away from the water’s edge.  In front of it gardens were built connecting the Watergate to the Thames.  A memorial to Bazalgette can be found on the embankment just south of these Victoria Embankment Gardens.

Nicholas Hawksmoor is one of Britain’s most famous architects.  He started work as a clerk for Sir Christopher Wren at age 18.  He worked with Wren on Chelsea Hospital, Hampton Court and St. Paul’s Cathedral, among other iconic buildings.   Later he helped with, and finished, the construction of Blenheim Palace, and he also built Castle Howard.  He was commissioned to complete Kings College, Cambridge and he also designed the west towers of Westminster Abbey (completed posthumously).  It is still debatable as to how much Wren influenced Hawksmoor, or the young Hawksmoor influenced Wren.  Despite such a prolific career it is somewhat surprising that there are only 6 churches in London designed and built by him - St. Alfege’s in Greenwich is one of them and an excellent example of Baroque architecture. See another of our posts for information on Hawksmoor’s St. Mary Woolnoth: http://wp.me/p2r6no-3x

History:  Alfege (Alphege) was the Archbishop of Canterbury from 1006 to 1012.  He was killed 19-April-1012 by Danish raiders who had held him captive for 7 months (the first Archbishop to be murdered).  To commemorate him a church was erected on the place of his death.  Several churches have existed on this spot - the 2nd church stood here from 1290-1710.  The current church, built by Hawksmoor began construction in 1712 and was completed in 1714.  It incorporated the medieval tower (now refaced and topped with a spire).  The church was badly damaged by incendiary bombs during WWII and was restored in 1953.

Other Interesting Facts:  2012 marked the 1000 yr anniversary of Alfege’s death - an event recognized by a pilgrimage and service by the current Archbishop of Canterbury.  King Henry VIII was baptized here in 1491.   The organ console from 1552 is still viewable. General Wolfe, famous for his defeat of the French at Quebec City in 1759 but who died in combat in Canada, is buried here. In fiction, Charles Dicken’s novel Our Mutual Friend a wedding occurs here. The church is located within the Greenwich UNESCO World Heritage Site.

Visiting:  The church is generally open Mon-Fri 11-4 (2pm on Thur), Sat 10-4, and Sun 12-4.  Informationl panels throughout the church provide details on its history.  Guided tours can be arranged through the church office.  There are services throughout the week.  Visit their website for details: http://st-alfege.org/

The Clerk’s Well gave its name to the district of Clerkenwell and has a long history in this area of London. It was the scene of medieval miracle plays performed by the parish clerks of London and it was mentioned by William Fitzstephen in his description of the city as early as 1174.  Until the dissolution of the monasteries, the well was located in the boundary wall of St Mary’s Nunnery. After the nunnery closed and Ray Street (now Farringdon Lane) was built, the well was accessed through the basement of a building in this road.  In 1800 a pump was placed at pavement level to allow public use of the well but by the middle of the 19th century the well was closed.  For many years, the exact location of this important site was uncertain, until it was rediscovered in 1924 during building work in Farringdon Lane.  Located at 14-16 Farringdon Lane, EC1 visits can be arranged by appointment free of charge. To book a visit, please contact the Islington Local History Centre.  For more info visit the web site:  http://www.islington.gov.uk/islington/history-heritage/heritage_borough/bor_sites/Pages/clerkswell.aspx

Update:  From 7-Nov to 13-Jan-2013, the Quadriga Gallery’s exhibit focuses on how Ancient Egypt has influenced British Architecture.

Wellington Arch:  Set in the heart of royal London at Hyde Park Corner, Wellington Arch is a landmark for Londoners and visitors alike and a great addition to a memorable day out in London.  Visitors can enjoy the glorious panoramas over London’s Royal Parks and the Houses of Parliament from the balconies below the spectacular bronze sculpture surmounting the arch. Wellington Arch has re-opened following a refurbishment which includes the launch of a new exhibition space, The Quadriga Gallery.  Exhibits here change throughout the year.  The property is managed by English Heritage.

Opening hours are 10-5, Wed-Sun.  For other specifics and for exhibit information go to:  http://www.english-heritage.org.uk/daysout/properties/wellington-arch/

In Walter Besant’s “The History of London” the author claims that very few people know about the statue of Queen Elizabeth that can be found at St. Dunstan-in-the-west Church on Fleet Street.  According to the church (www.stdunstaninthewest.org) and to popular belief, the statue was carved in 1586 and originally stood on the west side of the Lud Gate (part of the roman city wall) before it was demolished.  It is believed to be the oldest outdoor statue in London and the only remaining statue made of Queen Elizabeth while she was alive.  The church is located at 186a Fleet Street, City of London, EC4A.