Located on the Strand by the Savoy, Simpson’s-in-the-Strand is one of London’s most historic establishments for over 180 years, that over the years has offered everything from coffee, cigars, chess and food - and today even offers lessons in carving!

Its unique history makes it a place worth knowing about.

History:  In the early 18th Century the Fountain Tavern stood here and was home to the Kit-Cat Club, a famous political and literary group with members such as Congreve and Walpole.  By 1828 a new building, housing the “Grand Cigar Divan”, opened on the site as a smoking club.  It then evolved into a coffee house and also a chess club.  In 1848, the owner (Samuel Reiss) teamed up with the chef John Simpson so that they could expand the facility with a restaurant.  Then known as “Simpson’s Grand Divan Tavern”, its popularity took off.   Dickens, Gladstone and Disraeli were all regulars.  Such was their success that they claimed Charing Cross station was opened partly to support demand for access to their restaurant!  By the 1850s it had achieved fame for both its food and its notoriety as a chess venue.

Chess:  In the 19th Century Simpson’s could rightfully claim itself to be the home of 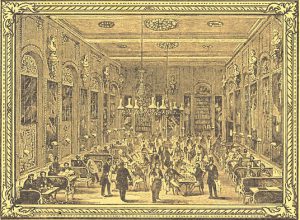 Chess.  From its earliest days Chess matches were played against other coffee houses in the town, with top-hatted runners carrying the moves from club to club.  In house, giant chess pieces and boards were used to make it easier for viewers to see and bet on the action. The Grand Cigar Divan soon became recognised as the home of chess in England. All the famous players of the time played here, and the ‘Immortal Game’, considered the greatest every chess game, was played here in 1851.  Simpson’s also hosted major global tournaments in 1883 and 1899, and the first every women’s global tournament in 1897.  By 1904 the 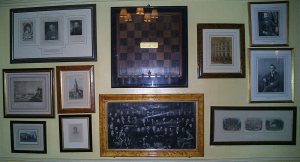 new managers removed the focus on chess and it faded from its position of prominence.  However, periodic tournaments are still help at Simpson’s to recognize and celebrate its role in the history of chess.  One of Simpson’s original chess sets is on display in the Bishop’s Room - so if no event is being held there ask to see it - along with other chess memorabilia.  You don’t need to eat here to view these items. 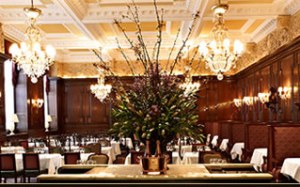 beef a specialty.  Meats are carved at the tableside from antique silver-domed trolleys - a practice that started in the mid 19th Century to avoid disturbing the chess games and allowing food to be taken directly to the chess tables.   This style of service continues today.  In 1974 it was one of only 9 London restaurants to be the first recipients of a Michelin Star in London.  The restaurant is open for breakfast, lunch or dinner.  The Knights Bar is open for drinks and small bites from 11 onwards.

Literature:  Simpson’s is referenced throughout many books, including those by E. M. Forster, P. G. Wodehouse and Arthur Conan Doyle’s Sherlock Holmes stories.

Carving Classes:  While not cheap, one truly unique offering at Simpson’s, and something very British, is the ‘art of carving’ class.  Since Simpson’s is famous for its tableside carving, you can learn from their Master Cook the full art of carving meat.  The class is 90 minutes long and includes instruction on carving many different types of joints.  Upon completion you receive a presentation of a carving knife and fork, a ‘Certificate of Competency’ and then you get to eat lunch where you can demonstrate your carving skills to those who join you!  All for £155 and classes are usually on Sunday.  See their website for specific details and/or making a booking:  http://www.simpsonsinthestrand.co.uk/ 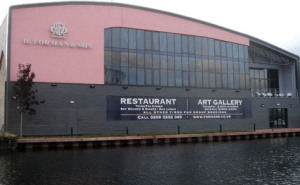 Founded in 1905, H. Forman & Son has been a very successful smoker of salmon - with clients such as Harrods, the House of Lords, Wilton’s Restaurant, as well as Fortnum & Mason.  But this successful business happened to be located on land that was to become the Olympic Park.  In order to cede its land, Forman’s was able to secure a wonderful canal-side location adjacent to the Olympic Park - with perhaps the best views of it - and expand from being a smoker, to also being a restaurant, bar, gallery and event venue.  A visit to Forman’s is well worth the trip and for those who would like to view the Olympic Park while either admiring art or dining on salmon - this is the spot.

H. Forman & Son (the smoker): The Forman family came to London from Russia back at the beginning of the 20th C.  The patriarch - Harry (Aaron) Forman - knew one thing well - curing fish.  He started his trade by importing brined salmon from

the Baltic.  However, he soon discovered Scotland’s salmon - which were much closer and easier to obtain.  Given how fresh the Scottish salmon were he modified his curing process - known as the ‘London Cure’ (salty and oakey) - and the result was quickly successful.  Soon Henry Forman was supplying London’s best restaurants and stores - something that continues to this day.  There are areas to view the smokery from inside the building and tours are available.  It is significant to note that Forman’s has remained a family business with Lance Forman, Harry’s great grandson, now running the business.

& bar certainly has plenty of the smoked salmon on the menu as well as various seasonal British foods.  Regardless of the menu, the views across the water at the Olympic Stadium are stunning.

Forman’s Smokehouse Art Gallery:  In addition to the restaurant, Forman’s also has an art gallery with the goal of providing exposure to new artists.  The exhibitions change

regularly so check their website for details.  The 600sq. metre space has great views of the Olympic stadium and is on the top floor of Forman’s building.  You can get a drink from the bar, wander the gallery, and enjoy the art and views.

Forman’s Fish Island:  While least likely to be of interest to the diner or art gallery visitor, it should be noted they do also have a corporate event and party venue under the name ‘Forman’s Fish Island’ as it does hold some interesting events throughout the year - some of which may be open to the public.

Located one hundred feet above Kensington High Street in central London, The Roof Gardens and Babylon Restaurant are unique.  Originally above Derry and Tom’s department store which opened in 1933, The Roof Gardens were the dream child of the vice president of Barkers, Trevor Bowen, who employed landscape architect Ralph Hancock to realise his vision. There are three themed gardens, with over 70 full size trees, a flowing stream stocked with fish and resident flamingos & ducks.  Sir Richard Branson purchased the gardens in 1981.

The gardens sprawl over 1.5 acres including fully grown oaks and fruit trees, growing in just 1.5m of soil.  The Gardens are open for the public as long as not booked for a private function.  Call ahead to confirm access: 0207 937 7994.  Overlooking the gardens on the 7th floot is Babylon Restaurant.  Special events include live Jazz on Tuesdays, alfresco dining & outdoor BBQs as weather permits.

The gardens also host outdoor film nights.  Check the website for hours of access and for information on booking at Babylon Restaurant:  www.roofgardens.virgin.com/

The three gardens are: (1) Spanish Garden: Based on the Alhambra in Granada, Spain, this garden has a distinct Moorish flavour. (2) Tudor Garden: This garden is filled with evergreen shrubs surrounded by fragrant lilies, roses and lavender in the summer months, while wisteria fills the air with its delicate fragrance. (3) English Woodland: This is undoubtedly at its best in the spring months, when thousands of narcissus, crocus, muscari and anemones burst into life. For a different perspective of the Royal Opera House consider a backstage tour (and combine it with a glamourous lunch or tea - see below).  The ”Backstage Tour” also includes visiting the front of house, stage, dressing and set/prop areas of one of the world’s leading theatres as it prepares to open its doors for the evening performance.  Included in the tour is an introduction to the colourful history of the theatre, an insight into the re-development of the Royal Opera House and a look at aspects of current productions. As the Royal Opera House is a fully working theatre, each tour is a unique experience, and may include opportunities to see The Royal Ballet in class, or the magnificent backstage technology in operation. The backstage tour lasts about 75- 90 minutes.  Tours are held at preset times and dates.  Tickets need to be purchased in advance and tours do generally sell out, so plan ahead. As of posting, current full price tour is £10.50 and concessions are available.

Other tour types (all shorter at about 45 mins) exist with different focuses.  Visit the website for more information or to book tickets: http://www.roh.org.uk/visit/tours

There is also a gift shop open Mon-Sat from 10 am - 7:30pm.  The restaurants and bars are generally open to non-ticket holders (check online for details), and combining the tour with lunch or afternoon tea at the Amphitheatre Restaurant is recommended for a more glamourous experience (to make a reservation, call +44 (0)20 7212 9254). 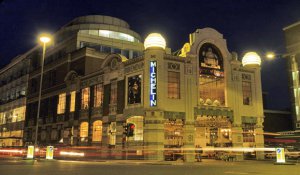 In anticipation of Dunlop losing control of the tyre market with the loss of patent protection, Michelin Tyre Company Ltd commissioned the building of Michelin House as their first permanent British headquarters in 1909.  Its design style has been described as examples of Art Nouveau, proto-Art-Deco, Secessionist Functionalism and geometrical Classicism. It has even been described as ‘the most completely French of any Edwardian building in London’! Designed by Francois Espinasse, an employee of the company, who was probably under the guidance of Edouard and Andre Michelin.  The building opened in 1911.  It had fitting bays, basement storage or up to 30,000 tyres, and a ‘touring office’ with maps and accessories for planning journies.

In 1985 Michelin moved out of the building and in June of that year it was bought by Sir Terence Conran and Paul Hamlyn. Planning permission for a Restaurant, bar, major retail store and additional office space was obtained and a programme of extensive restoration of the building and reinstatement of many of its most prominent original features was begun.  Conran Design Group were responsible for the interiors of the new restaurant and bar on the ground and first floors, and for the retail area. In all three spaces, they opted to retain aspects relating to the history of the building whilst introducing new themes appropriate to its change of use.  For more information or reservations go to: http://www.bibendum.co.uk/index.html

Both the Oyster Bar and the Restaurant refer directly to the building’s association with tyres and, in particular, to Bibendum, the Michelin man. Both are named after him and take advantage of every opportunity to reflect his corpulent profile. Both the Restaurant and the Oyster Bar continue to retain strong French overtones, with a clear emphasis on quality and style. The new Michelin Building is now every bit as concerned with modernity, efficiency, quality and style today as it was when it first opened in 1911, nearly a century ago.