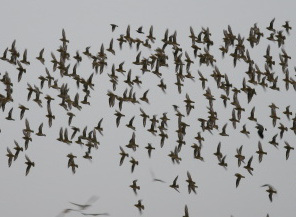 There are very few ancient landscapes remaining anywhere in the Greater London area, but Rainham Marshes is one of them.  This landscape was untouched for centuries as it was set aside for a military firing range over 100 years ago.  Consequently the land form was unaltered and much of the natural habitat remains to this day.  The Royal Society for the Protection of Birds (RSPB) acquired responsibility for the land from the Ministry of Defence in 2000.   RSPB then set about transforming it into a useable nature reserve for people to visit.  Officially opened in 2006, Rainham Marshes is now the largest remaining expanse of wetlands bordering the upper reaches of the Thames Estuary.

With approximately 1,015 acres of marshland, this reserve is an excellent place for Londoners who wish to experience nature.  Given that it is only 9 miles east of Canary Wharf, and the Orbit is clearly seen from here, this nature reserve is a stark contrast from the city on the horizon.

There are over 2.5 miles of boardwalk style nature trails making it is easy to get around the reserve.  When visiting you can expect to see breeding wading birds in

spring and summer, and large flocks of wild ducks in winter.  Typical birds seen here include the Avocet, Lapwing, Little Egret and Ringed Plover.  Birds of prey, such as the Peregrine, and rare birds are regularly seen here too. Numerous mammals, including a large population of water voles, are found here too.

Visitor Centre:  The visitor centre has large picture-windows that look out across th e marshes. Inside the centre are a shop, cafe and childrens play area.   There are also several bird hides within the reserve.

Events:  Special events are scheduled throughout the year with a focus on nature walks and birdwatching walks for novices to experts.  See their website for full details: http://www.rspb.org.uk/reserves/guide/r/rainhammarshes/index.aspx

Nearest Rail: Purfleet (on the C2C line from Fenchurch Street). The reserve is a 15 minute walk from the station following the brown pedestrian signs along the riverside path. Turn right out of the station and then join the path at the Royal Pub. Follow the Riverside path and then cross the Mardyke Bridge to the Visitor Centre. Lavender Pond Nature Park is a small urban oasis providing a haven for wildlife, as well as a mini-rurual escape and an educational resource.  The Nature Park was created in 1981 by Southwark Council and is located in a portion of the old Surrey Commercial Docks.  These docks were once the centre of Britain’s timber trade and Lavender Pond was an expanse of shallow water where timber was floated to prevent it from drying out.  The original entrance was under a moveable bridge on Rotherhithe Street which provided access to small boats.   When the Port of London regulated water levels throughout the docks through the use of a newly built Pump House in the 1920s, the entrance to Lavender Pond was closed off. prevalent along the Thames before the development of the river banks from the 16th Century onwards.   This particular section of the Thames - Surrey Commercial Docks - evolved significantly in the 18th and 19th Centuries - with the building of the major docks - Greenland (1703), Russia (1810), Norway (1811), & Canada (1876).  In addition to these key docks three shallow timber ponds were created - known as Acorn (1811), Lavender (1815) and Quebec (1926).  Collectively, most natural waterscapes were lost to development.

Given the importance of the docks, they were heavily damaged in WWII.  Since then the area has gone through various phases of redevelopment and regeneration.  Surrey 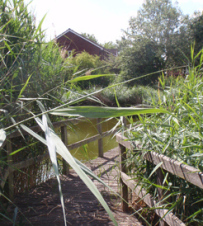 Docks’ 350 acre expanse officially closed in 1970.  By the 1980s, the Pumphouse was in significant disrepair, and the timber ponds had been mostly filled in.  But then efforts began to restore the area and the Lavender timber pond was restored back to that of a wetland area - with open water, marsh, reed beds etc.. Autumn is a perfect time to explore this lovely piece of woodland and a visit here is a lovely escape from the city.  It is arguably the closest pieces of ancient British woodland to the centre of London and for this reason, along with its natural beauty, should be considered for an outing.

In the 13th Century the Great North Wood (located to the south east of London) was over 800 acres and aside from being a food source, it became a vital supplier of timber for the Royal Dockyards at Deptford.  Over the years the woods were reduced in size through development.  While the accessible portion is about 23 acres in size, the Sydenham Hill Wood is adjoined by the Dulwich Wood - which doubles the remnant’s size.  While Dulwich Wood is privately owned by the Dulwich Estate it is generally open (though can be locked).  Sydenham Hill Wood is always open.

There are over 200 species of trees and wild plants, along with plenty of wildlife.  Some areas are traditional ancient English woodland - mostly comprising Oak and Hornbeam trees.  Other areas have newer varieties present that have seeded over the years from the nearby Victorian estates - including a Cedar of Lebanon and a Monkey Puzzle tree.  A few Victorian architectural relics can also be found in the wood left over from the estates that were developed here in the 19th Century.  The relocation of the Crystal Palace in 1854 caused the Dulwich Estate to seek new sources of revenue - which it did through land development.  In addition, a rail line was built through the woods to connect passengers to the new location of the Crystal Palace, but after the Palace burned down in the 1930s, the demand for the rail service declined and 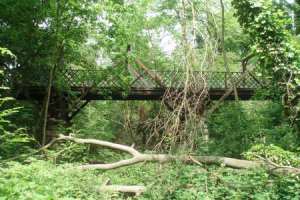 was ultimately abandoned and closed in 1954. The remains of the Nunhead-to-Crystal Palace rail line are still here in the form of a raised walking track, raised bridge and a tunnel (that is now home to the woolly long-eared bat - one of five species of bat that live in the wood).  The footbridge at the north end of the park is the ‘Cox’s Lane’ bridge from which Camille Pisarro painted his famous painting - “Lordship Lane Station, Dulwich” - which hangs in the Courtauld Institute of art.  This is the same railway track that is used for the walking trail at the nearby Horniman Museum.

The ponds in these woods are fed by the ‘Ambrook’, which is a mostly underground stream and lost tributary to the mythic Effra River that once flowed to the Thames.  As a side note there are plans afoot to find the source of the Ambrook and restore it to an above ground stream / waterway if possible.

Adjacent to the wood is a golf course which at one stage was farmland.  In 1732 Francis Cox, the publican of the nearby Green Man Public House built ‘Cox’s Walk’ - a wonderful oak-tree lined walkway - to facilitate easier access to his business for people from Sydenham Wells.  The walk is the entry to the woods when accessing from the north at the corner of Dulwich Common road and Lordship Lane - it is from here that you can walk the bridge Pisarro painted from.

The wood is managed by the London Wildlife Trust and have been designated as a local nature reserve since 1982. On their website they have four seasonal walking trail maps.  If you are going to visit I recommend you print out the map for the correct season - it will make your visit more enjoyable: