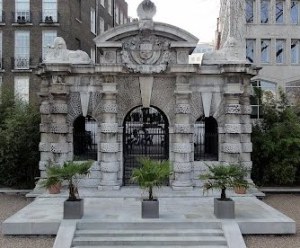 In years past the Thames river was much wider than it currently is, even containing numerous islands.  There are few places where one can visualize the width of the Thames in prior centuries, but within the Victoria Embankment Gardens is a stone structure that allows you to do just that - sitting almost 300 feet adrift from the Thames today.

History: A large estate was originally built in this location in the 13th century for the Bishops of Norwich.  It was confiscated by Henry VIII during the dissolution of the monasteries.  It was then granted to the Archbishop of York in the 15th Century and became known as York House.  The house was sold to George Villiers, the 1st Duke of Buckingham, in 1624.  The location on the Strand was exclusive as there were very few estates along this road connecting the City with Westminster.  Those estates located on the Thames side of the Strand naturally had access to the river.  Shortly after acquiring the property, the Duke built a ‘water-gate’ at the bottom of the property’s garden, on the bank of the Thames, to provide easier access to the property for travellers by boat.  This gateway is believed to have been built in 1626 by the Duke’s stonemason, Nicholas Stone, and some claim it was designed by architect Inigo Jones.  To either side of the gate are covered arches where people could wait for their boat.

The gate’s design is Italianate, similar to other designs built during the reign of King Charles I.  The Banqueting house, in nearby Whitehall ( see our post on this building http://londonunveiled.com/2012/06/28/banqueting-house/ for more information) is a grander period example of Inigo Jones’ s architectural works that also incorporates the Italianate design aesthetic. developers so that the Duke could raise capital to cover his debt obligations.  The only condition of sale was that when streets were laid out in the new development every part of his name and title (George Villiers, Duke of Buckingham) must be included in the street names.  In 1675, the house was demolished.  A new street plan was laid out on the property and the original streets were George St (now York Buildings), Villiers St, Duke St (now John Adam St), Of Alley (now York Place - but with the footnote on the sign ’Formerly Of Alley’) and Buckingham St.   At the south side of ths development is Watergate Walk where the stone Watergate is the only remaining structure from the York House era.  By the late 19th Century the gate had fallen into disrepair.  In 1893 the London County Council acquired the watergate so that it could be maintained for the public as part of the gardens.

The Thames Embankment:  In 1865 Joseph Bazalgette began construction of the northern Thames embankment, known as Victoria Embankment, to reclaim land from the Thames’ path.  Construction finished in 1870.  It also covers the then new sewer system for which Bazagette is also known.  The narrowing of the Thames meant that the York Watergate was now landlocked - almost 300 feet away from the water’s edge.  In front of it gardens were built connecting the Watergate to the Thames.  A memorial to Bazalgette can be found on the embankment just south of these Victoria Embankment Gardens.

For anyone with an interest in popular music history, a visit to Denmark Street in Soho is like a walk down memory lane.  Yet while many visitors strive to see Abbey Road, most ignore this location despite the fact that it is arguably London’s more significant location for music history.  In addition, several venues provide a way to experience the current music scene in a live and historically meaningful way.

While the original Tin Pan Alley was a specific place in Manhattan that developed at the end of the 19th Century as the hub for the music industry, the term has become synonomous for any area with a high concentration of music publishers, vendors and recording studios.  In Soho, Denmark Street (between Charing Cross Rd and St. Giles High St) became London’s Tin Pan Alley from the late 19th Century onwards, with its heyday from the 1960s to the 1970s.  There is still plenty to offer the visitor today as the street is lined with specialist music shops, eateries, bars and performance venues.

In the 1890s sheet music publishers set up business here focusing on a trade with all the nearby theatres.  By the early 1900s shops selling pianos and musical instruments started appearing.  Later came the recording studios and finally the live performance venues.

Regent Sounds Studio:  One of the most significant addresses here is 4 Denmark Street - home to Regent Sounds Studio (now Regent Sounds) - which was established in the late 50s as an independent recording studio. In 1961 the then owner, Ralph Elman, sold the studio to James Baring (heir of Barings Bank) who embraced the independent music culture and had become friends with many of the musicians who frequented the street.  In early 1964 the Rolling Stones recorded their first album creatively titled ’The Rolling Stones’ here.  After that the list of now famous musicians who recorded here is like a who’s who in music.  The list includes the Elton John, the Kinks, Black Sabbath and Jimi Hendrix.  There are some great historic pictures of artists recording here in the day on Regent Sounds website: http://regentsounds.com/history

Today the ground floor houses the newly reopened Regent Sounds - an independent music shop specializing in the sale of Fender and Gretsch guitars - while downstairs is the AlleyCat Bar/Club - open daily from 5pm til late - offering a variety of live music from Blues to Jazz.  See their website for specific events:  http://www.alleycatbar.co.uk

Denmark Street:  Many of the other shops on this street have a similar history and each one is worth exploring.  But the street is really the most significant as the names on the doors do change over time.  On this street Bob Marley bought his first guitar; David Bowie lived on this street in a camper van; Reg Dwight (now Elton John) worked here as an office boy at Mills Music (#20 Denmark St); Music magazines were published here - including NME (#5) and Melody Maker (#19); the now closed Gianconda Cafe (now Giancoda Dining Room) at #9 was the hangout for the Sex Pistols, David Bowie, the Slits and the Clash; and finally, the Sex Pistols lived 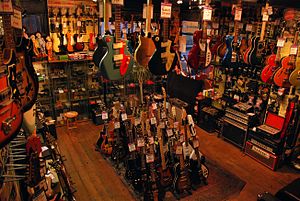 and recorded upstairs at #6.

This is just a selection of the storied history of this small street to nowhere.  A visit here can include a little shopping, eating, drinking and live music - but most importantly a step back in time.

Adjacent to 55-56 St Martin’s Lane and built into the frontage of The Theatre Goers Club of Great Britain, lies this beautiful short alley.  Built about 1627, walking along this charming court is like stepping back in time: the polished black doors have proper, highly polished knockers and knobs with brass plates announcing the names of the businesses therein.  Three large, working gas lamps light the passage and the Georgian bowed windows reveal their previous existance as a row of shops.  A plaque erected by the L.C.C. Survey states that the passage was previously known as Fishers Alley, with the current buildings erected in 1690.