Many people come to London for the shopping, but while nearby Oxford Street is full of ubiquitous brand name High Street shops, a short stroll off that road bring you to “Grays Antiques & Vintage Mews” - which offers visitors a broad array of collectible, antique and vintage items.  Housed in a stunning red terracotta building, Grays claims to be “one of the world’s largest and most diverse collections of fine antiques, jewellery, and vintage fashion”.

Regardless of whether the claim is accurate it is great fun to wander the floors of these two adjacent buildings looking at the stock from approximately 200 independent dealers with pretty much something for everyone.  While the two buildings are not interconnected, they are adjacent.

Whether a fan of buying antiques or just browsing, the broad range of dealers here (close to 200) can bring out the aspiring Lovejoy in anyone.  On a recent visit I found a great range of vintage watches, military memorabilia, silver housewares, jewellery and even mudlarking finds from the River Thames - quite unique stuff.  There is also a broad range of pottery, arts and clothing. 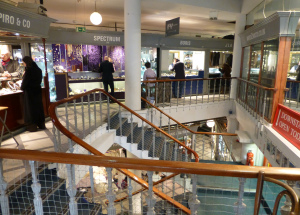 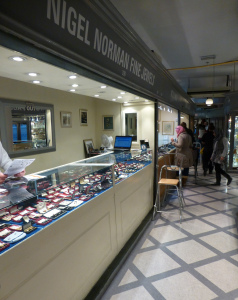 Prices range from the very affordable to the expensive end.  Though the dealers in the Mews building seemed to be slightly more vintage and affordable, while the main building leaned towards antique and pricier.

As a relatively new entrant to the London scene, Grays was established in 1977 within a 19th century terracotta building and a converted mews building behind it.  The Grade II listed building was commissioned by John Bolding & Son, and built in 1889-1891. 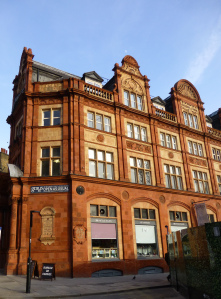 Bolding & Son was founded in 1822 and was in the ‘water closet’ business.  He was a direct competitor with Thomas Crapper and this building was the firms showroom and headquarters.   The mews section was built in the early 1900s and was taken over by Bolding & Son in 1931.  The firm took over Crappers firm in 1966, but went broke in 1969.  The building was abandoned and became derelict.  Purchased by Bernie Gray, it was restored and reopened in 1977. When the buildings were acquired for restoration the mews basement was under 6 feet of water.  Further examination determined the source of the water to be either the famous, but now underground, River Tyburn or a tributary to it.  This area of London has always been connected with the Tyburn. The Antique Centre is located just north of Brook Street and just south of Oxford Street - which was previously called Tyburn Road until the name changed in the 18th century.  Nearby Park Lane was originally Tyburn Lane, and at Marble Arch was the Tyburn Gallows.  The River Tyburn rises in Hampstead, flows through Regents Park and the West End of London under Mayfair to reach the Thames.  As this part of London was developed the river was culverted underground.   Grays Mews claims that their basement is the only place where you can view the Tyburn as running water (though it is contained within a narrow man-made ‘observation’ channel).  There is a nice little plaque here discussing the history of the Tyburn and the gallows.

Similar postings:  If this entry is of interest to you, consider looking at our posts on Alfie’s Antiques Market and the Silver Vaults.