Located on the Strand, the Savoy Chapel is a truly unique building with a fascinating history.  Also known as the Queen’s Chapel of the Savoy, it is arguably one of the lesser known historically significant Royal buildings in London.

History of the Savoy Estate:  The Savoy is a small district in central London within which the widely known Savoy Hotel sits.  Originally this area was a large estate given to Peter of Savoy by Henry III in 1246.  When Peter died, his mother, Queen Eleanor, gave the estate to Edmund, the 1st Earl of Lancaster.  Of note is that to this day the Savoy Estate continues to be the principal land holding of the Duchy of Lancaster in London. 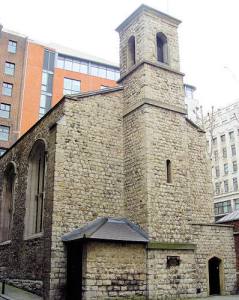 Edmund’s great-granddaughter and her husband, John of Gaunt, built a large palace on the estate that was destroyed in 1381 during the Peasant’s Revolt.   A little over a century later, the property was under the control of Henry VII who envisioned building a hospital to serve the poor on the estate, and in 1512 its construction began.  Records show that the hospital included a main building, a dormitory, a dining hall and three chapels - of which the Savoy Chapel is one.  Dedicated to St. John the Baptist, this chapel (also known as the Queen’s Chapel of the Savoy) is all that remains of Henry VII’s hospital complex.

At the beginning of the 18th century, the hospital was closed and by the 19th

century most buildings had been demolished.  Only the Savoy Chapel (the hospital’s main chapel) survived.  Fires damaged the interior in the mid 1800s which led to much interior reconstruction yet the outer walls date are mostly original and date from the early 1500s.

The Chapel’s uniqueness:  Curiously, the Savoy Chapel was the first church lit by electricity in London (1890).  It was also one of the most desirable locations for weddings during Victorian times.  But what makes the Savoy Chapel particularly unique is that it is a private chapel of the “Sovereign in Right of the Duchy of Lancaster”.  Today, the Queen holds the title of Duke of Lancaster. It is thus outside of any Bishop’s jurisdiction, yet still part of the Church of England (as is Westminster Abbey).    It is also a “Chapel of the Royal Victorian Order”, which makes it the ‘home’ chapel for anyone receiving this award which is given for service to the monarch, the monarch’s family or Viceroys.  Recipients have the letters GVCO, KCVO or DCVO, CVO, LVO, MVO or RVM.  The Chaplain is thus the Chaplain of the Royal Victorian Order.  This is their only chapel. In the 18th century the chapel was known as a place where marriages without banns could occur.  In ‘Brideshead Revisited’, Evelyn Waugh’s wrote it is “the place where divorced couples got married in those days – a poky little place”.

At all services the National Anthem is sung, but the lyrics are amended to say “Long Live Our Noble Duke” (yes, for some reason the Queen is the Duke not Duchess of Lancaster).  The Duchy of Lancaster still maintains and fully funds the costs of the chapel.  This includes the extensive renovations (1999-2000) that restored the ceiling to its earlier glory, & the garden redesign (2003).

Services / Visiting:  The chapel is open to all, Mon - Thu 9:30am - 4pm, and Sunday 9-1pm.  Sunday service: 11am - which is usually a choral eucharist. Occaisionally other services occur including periodic lunchtime and evening events.  See the Duchy’s website for details:  http://alturl.com/vhg5q

4 thoughts on “Savoy Chapel ~ a very unique place with a great history.”