Founded in 675, it is the oldest church in the City of London.  It contains a Saxon arch from the 7th Century.  This part of the church is the oldest surviving section of church in the City.  Founded by the Saxon Abbey at Barking it was for many years known as All Hallows Barking.  Traces of an old Roman building have been found in the crypt indicating it was built on a former Roman site.  The church is steeped in history - from an explosion caused by gunpowder stored in the basement that destroyed 50 nearby homes in 1650, to its surviving the Great Fire of London, to its reconstruction after devastation from German bombing in WWII.  Its survival from the Great Fire was attributable to the actions of Admiral Penn whose naval brigade demolished properties around the church to create a fire break.   During the Great Fire Samuel Pepys watched the fire from the steeple Admiral Penn was the father of one of the founding settlers of America - William Penn, for who Pennsylvannia is named.  William Penn was baptized here in 1644.  John Adams, the 7th President of the US, was married here in 1797. 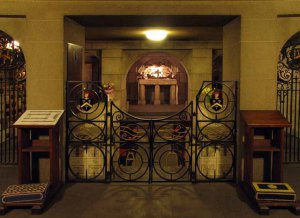 The church has a museum called the Crypt Museum, containing portions of a Roman pavement, which together with many artifacts, was discovered many feet below the church in 1926. The exhibits focus on the history of the church and the City of London, and include Saxon and religious artefacts.

The church is open daily from 8-6pm (10-5 on weekends).  There are regular guided tours and a bookstore for gifts.  Events are held throughout the year, including regular Thursday lunchtime organ recitals, plays and musical events.  Check their website for more details:  http://www.allhallowsbythetower.org.uk/