East London, eat, in the movies Trinity Buoy Wharf is located at the confluence of the River Thames and Bow Creek, in Leamouth.  In 1803 this land became part of the Corporation of Trinity House (Trinity House is focused on the safety of shipping and seafarers - and has been since it was granted a Royal Charter by Henry VIII in 1514 ).  A seawall was rebuilt in 1822 and the site became the primary maintenance depot and storage facility for Thames navigation aids and for the docking and repair of Lightships.  In 1988, the property passed to the London Docklands Development Corporation, and in 1998 Urban Space Holdings took control of the wharf through a long-term lease.  It is now being developed and managed as a ‘centre for the arts and cultural activities’.  Studio spaces occupy used shipping containers, as does some office space.  The University of East London has a Fine Arts Studio and two dance studios here.   There is always a wide range of activities going on at the Wharf - much of it free to the public.  Go to their website for information on events, including Theatre, Dance and Art events.Go to their website for all details:  www.trinitybuoywharf.com

Of particular note is the Lighthouse located here - London’s only one.  Built in 1864-66 it was originally a testing site - even Michael Faraday conducted experiments here.  The Lighthouse is now home to ‘LongPlayer’, a continuous 1,000 year long piece of music that began as part of the millenium celebrations.  The music ends 31-12-2999.  There is a listening room in the Lighthouse open every weekend from 11am - 5pm.. For more info on the music go to: http://longplayer.org/

Other exhibits include “The Faraday Effect” - a tiny museum documenting the life and times of the famous scientist.  At the time of this posting, one of the more unique exhibits is the ‘gum art trail’, which extends from East India DLR to the Wharf. Eateries are the ‘Fat Boys Diner’ (seen in the film Sliding Doors) which offers a 1940s American Diner experience (open 10-5 Tue-Sun) and the ‘Driftwood Cafe’ with views of the River Lea from a converted shipping container (open 8-3 Mon-Fri). 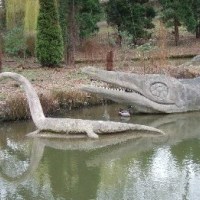