Located just south of the Olympic Park is Three Mills Island - home to the largest tidal mill in the world and also home to London’s largest film studio.  The island is a conservation area bordering the River Lea offering several sites worth visiting.  While the studios cannot be toured, the island, tidal mill, visitor centre and adjacent park can all be visited.  The architecture and location are unique - with cobblestone streets, oast house architecture, a clock tower and old brick buildings, one feels transported back in time to a place far away from East London. History: This area has been home to mills since Saxon times.  In the Domesday Book there were 8 tidal mills on the River Lea.  Five mill areas were recorded in the Lea tributaries: Pudding Mill, City Mill, Waterworks Mill, Abbey Mill and Three Mills. At Three Mills the mills were built on a man-made island to make the most use of the ebb tide. By the late sixteenth century the area of Three Mills was still known to have two producing mills - grinding corn and making gunpowder.  A third mill was reestablished later. While water mills were generally powered by the downstream flow of water, the mills located here took advantage of the tidal flow up the Thames Estuary and Bow Creek.  High tide water was essentially trapped behind a sluice and then released at a controlled rate to drive the mill wheel.  In medieval times historians estimated the mills here probably operated for 3-4 hours per tide.  By the early 20th Century, advances in engineering allowed the mills to work for up to 8 hours per tide.  Grain, delivered by barge or cart, was ground here for various uses.  Prior to 1820 some of the milled grain went to the adjacent distillery for alcohol production.  It was then stored in a large bonded warehouse on adjacent land before being transported elsewhere to be made into gin.  After 1820 it became illegal for alcohol to be made on the same premises as the mill.  In 1872 the mill was purchased by a Gin distiller from Clerkenwell, where one assumes the alcohol was turned into gin.

The Buildings:  The three mills here were House Mill, the Clock Mill, and a Windmill. The first two still survive. House Mill, is Grade I listed, and is the only structure than contains it milling components.  Originally built in 1776, it was rebuilt after a fire in 1802.  It continued in operation until 1941.  Saved from demolition in the 1970s, restoration began in 1989.  The project still calls for the restoration of all four water wheels and the internal machinery. The hope is that electricity can be generated and put back into the grid.  Footage of the restoration project and an insight into the workings of the Mill can be seen here: http://housemill.org.uk/  The Grade II listed Clock Tower was built in 1817 and was in use as a mill up until 1952.  The Windmill was here until approximately 1840, but has since been lost.  There is also a Customs House and a reconstructed Miller’s House on the site in addition to the film studio buildings.

House Mill:  Open every Sunday from May-Oct from 11-4pm, and on periodic other Sundays throughout the year.  All tours through the mill are guided, last just under an hour and start as demand warrants.  Cost is £3.00 (concessions £1.50, children free).

The Miller’s House: Next door to the House Mill containing a visitor information and education centre.  Start here for tours.

The Miller’s Cafe: Open Mon-Fri 10-3 and when the House Mill is open for tours. 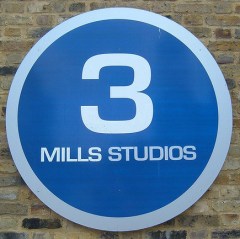 3 Mills Studios:  Located just north of the Customs House and Clock Mill is this gated studio complex.  While not open to the public, the studio houses almost a dozen sound stages, a screening room, a prison set, period building sets, and production facilities known to be commonly used by Danny Boyle.