While a bell is often used at a funeral, this quote (later used by Hemingway as a title of a novel) relates particularly well to St. Sepulchre-without-Newgate for a variety of reasons, including its relationship to Newgate Prison, its inclusion in the rhyme Oranges and Lemons, and lastly in its traditonal role as a church.

St. Sepulchre-without-Newgate is the largest parish church in the City of London with an important history dating back to 1137.  This history includes a connection with John Smith (whom Pocahontas is claimed to have saved from execution in the Colonies).  Nowadays, St. Sepulchre’s is best known as the National Musician’s Church with a vibrant musical tradition. History:  The church is built on the site of an early Saxon church.  Originally named St. Edmund, the name was expanded to St. Edmund and the Holy Sepulchre in the 12th Century while under the control of Augustinian Canons - or Knights of the Holy Sepulchre (the Holy Sepulchre refers to the place of Jesus’s burial, which is claimed to be within the church of the same name within the Old City of Jerusalem).  As time passed the church became known as ‘St Sepulchre’.  Its official name includes the ‘without-Newgate’ suffix as it was located just outside the New Gate of the Roman Wall surrounding the City (now demolished).

While the church is first mentioned in 1137 the structure was significantly re-built in 1450.  Damaged heavily in the Great Fire of 1666, it was restored by Wren’s architectural firm in 1670s, with much of the tower and exterior walls surviving.   Further renovations took place in the 1700s and 1800s.  Much of the interior is from the mid-1800s.  Fortunately it was a rare survivor of the Blitz in WWII. 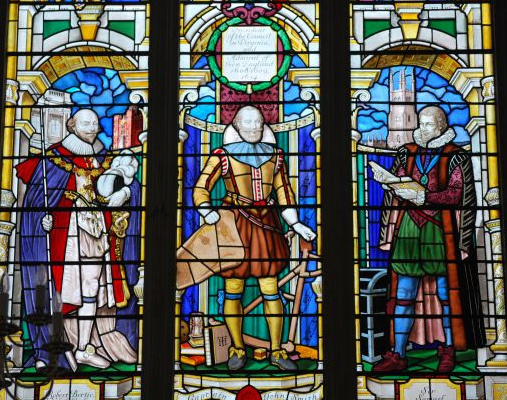 Notable Parishioner:  The church is the burial place for Captain John Smith, the English explorer, soldier and settler of Jamestown, Virginia.  His life was supposedly saved by Pocahontas and he later became the 1st Governor of the colony of Virginia.  He died in 1631 and was transported back to England.  He was buried in the south aisle of the church in 1633 where a magnificent stained-glass window commemorates him. 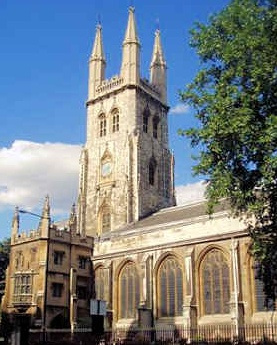 Today:  In the late 19th Century a tenor in the church’s choir, Henry Wood, would go on to fame, forever connecting the church as a central part of Britain’s music.  Baptised here in 1870, Henry Wood developed his love for music at the church learning how to sing and play the organ, but he became most well known as the face of the Proms - conducting them for nearly 50 years.  When he died in 1944 his ashes were interred here, leading to the dedication of the Musicians’ Chapel.  Today St Sepulchre’s is now best known as the National Musicians’ Church.  The church continues to grow through links to musicians and musical institutions.  Through the Friends of the Musicians’ Chapel, Concerts and Recitals are organized continuing a strong musical tradition. Also of note the south aisle of the church holds the regimental chapel of the Royal Fusiliers (City of London Regiment) and its gardens are a memorial garden to that regiment.

Folklore & Song: Famous in folklore, the twelve church bells of St. Sepulchre are remembered in the rhyme “Oranges and Lemons” in the couplet ”so when will you pay me, say the Bells of Old Bailey”.  While the original meaning of the rhyme is well debated, what is certain is that the great bell at St Sepulchre tolled as condemned men passed from nearby Newgate prison to the gallows (see my post on the Viaduct Tavern for more info on the Old Bailey). Also at midnight on an execution day, the church’s Bellman would go by an underground passageway to Newgate Prison where he’d ring twelve double tolls to the prisoner on the Execution Bell and recite a rhyme reminding the condemned that the day of execution had come. The hand bell is displayed in the church alongside the rhyme that was read to prisoners.

11 thoughts on “St. Sepulchre-without-Newgate ~ London’s largest church, home of the ‘Bells of Old Bailey’ & a connection to Pocahontas.”