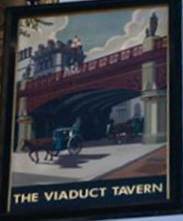 The Viaduct Tavern in central London has an interesting history for a variety of reasons.  It is a great example of Victorian “Gin Palace” design, a tribute to an architectural first (the Holborn Viaduct), and has links to the old Newgate Prison.  For all of these reasons it is worth a visit. Gin Palaces:  In the 18th Century gin gained in popularity because of its claimed medicinal benefits, in addition to being alcohol!  Small ‘dram shops’ opened up throughout London selling gin either to take home or drink standing at a counter.  Many of these small shops were originally chemists.  As popularity grew and these ‘dram shops’ became larger many also became licensed to sell wine and beer.  By the 1820s-1830s some of these establishments became known as “Gin Palaces” due to their ornate fittings, gas lighting and elaborate décor.  While none of the truly original gin palaces survive, the term lives on with the highly ornate and decorated pubs that were built in the latter half of the 19th Century.  One such pub is the Viaduct Tavern, which is clearly an authentic survivor of the Victorian Gin Palace style.  Gin Palaces have influenced all pubs in that the bar is a relic of the counters installed in the dram shops, and the ubiquitous mirrors and etched glass panels remain from the Victorian design aesthetic. The Holborn Viaduct:  The pub’s name celebrated the opening of the Holborn Viaduct - as the pub essentially lies at the east entrance to this section of roadway.  Construction of this viaduct- essentially a flyover and the first ever in central London - began in 1863 and was completed in 1869, the year the pub opened. It was considered a major architectural accomplishment (it is still there today) and was opened by Queen Victoria.  It replaced the Holborn Bridge that spanned the River Fleet valley (though the Fleet had long been taken underground). Newgate Prison:  There have been numerous claims over the years that in the cellar of the Viaduct Tavern are five old prison cells.  This is debatable and they may have been modified to look this way, or may just be old storage rooms, but the pub’s connection to Newgate Prison is accurate.  When it was built, Newgate Prison and a small Court were across the street.  The prison was completely demolished in 1902 making way for the ‘Old Bailey’.  It is also likely that the land the pub stands on was the original site of the “Giltspur Compter” (a debtors’ prison), which operated from 1791 to 1853.  Today the pub doesn’t make the claim that the cellars were once cells part of Newgate, preferring a more cautious assertion that they were part of the Giltspur Comptor, though it too had been completely demolished before the pub was built in 1869.

Hangings were a public spectacle in the street until 1868, the year before the pub opened. The condemned would be led along Dead Man’s Walk, a caged walkway between Newgate Prison and the Court.  It is claimed that many were buried under the walk itself.  The small water feature / fountain across the street purportedly marks the place where executions of prisoners occurred.   Leading some to claim the pub is haunted by spirits in the area. The Pub Today:  The inside of the pub still has a wonderful décor recalling the Gin Palace style. It also still has a “toll booth” where the landlord would have sold tokens for beer, keeping the money handling out of the hands of the bar staff – a unique feature.  The Viaduct Tavern is closed Sat / Sun.  Open Mon-Fri 8:30am - 11pm.  It is a Fuller’s owned pub but they do serve some real ale.  Given its history as a Gin Palace they pride themselves on a wide range of gin choices.  Meals are served including Smithfield sourced meat.

2 thoughts on “The Viaduct Tavern ~ a Victorian Gin Palace”