St. Botolph was the patron Saint for travellers and as such most of the churches with this name were located just inside (within) or outside (without) the City’s gates.  This particular church is unique for a variety of reasons.  While it was the first church in the City to convert its burial grounds to a public garden, it is perhaps most unique as the home of the only public tennis court in the City of London.  The court is also used for netball & anyone can reserve it.  Between the garden and the sports court those in the area are offered a respite from the busy Liverpool Street station area and perhaps a good game to watch or play. 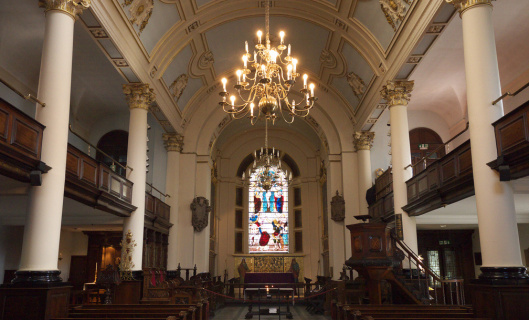 The Building:  While it is probable Christian worship has occurred on this site since Roman times, it is certain that a Saxon church was located here.  Foundations of this church were discovered when the present church was built in the early 18th Century.  The first recording of St. Botolphs was in 1212 under the name ‘Sancti Botolfi Extra Bishopesgate’.  While this medieval church survived the Great Fire, it was rebuilt between 1725-1728 - the fourth known church at this location.  The building in classical in most of its design with aisles and galleries, but it has several unique features.  The tower at the East End (usually at the west end), with the chancel & altar underneath. There is also an atypical glass dome above the nave from the 19th Century.  There are eight 18th Century bells that are typically rung every Wednesday at lunchtime. History & Notable People:  In the March 1311, the Knights Templar were tried at an inquisition both here and at St. Martin within Ludgate on charges of heresy after the Pope dissolved their Temple.  They appeared in front of an Inquisition led by the Bishops of London & Chichester.

The actor Edward Alleyn, a contemporary of Shakespeare’s and the founder of Dulwich College, was baptised here in 1566.  John Keats, the poet, was baptized in the current font in 1795.

As a point of interest, the Priory of Bethlehem was located next door to this church until it was dissolved in 1535 by Henry VIII.  The buildings of the Priory were then used as a hospital for the mentally ill - a lunatic asylum.  The contraction of Bethlehem was ‘Bedlam’ - thus giving us the modern meaning.

One of the Vicar’s of the church (from 1863-1896) was William Rogers who founded the Bishopsgate Institute (see my article on this Institute here) just up the street.

While a survivor of the Great Fire and the Blitz (only one window was lost), the church was damaged twice by IRA bombs.  In 1992 the bombing near St. Mary Axe damaged the exterior slightly, but in April 1993 the Bishopsgate bomb opened up the roof and blew out the doors and windows, and damaged the offices and Vestry of the church.  Restoration work took over 3 years but in 1997 it was completed and the church fully reopened. project followed taking three and a half years to return the church to its former glory.

The church contains the Regimental Memorial Chapel of the Honourable Artillery Company, the Book of Remembrance of the London Rifle Brigade, and (rather uniquely) a memorial for those with hæmophilia who have died as a result of contaminated blood products. The Churchyard:  The church’s burial grounds were the first in the City to be converted into a public garden in 1863.  While a controversial change in its day, the space is very popular.  Also in the garden is St. Botolph’s Hall (1821), once a school as the stone figures at its entrance attest to.  It is now available for hire as a function room.  The memorial cross (1916) at the garden’s entrance is believed to be the first memorial of the Great War to be set up in England. 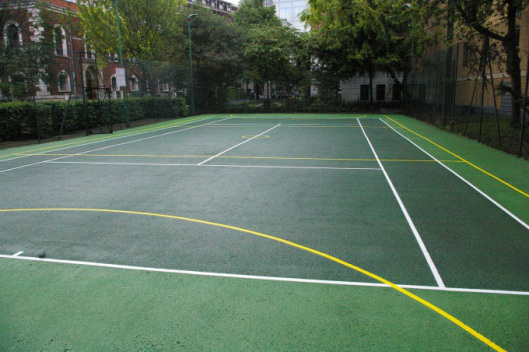 The Tennis & Netball Court:  The Tennis and Netball Court is open all year. From October to May it is used for netball only.  The rest of the year both tennis and netball are played here.  The court is open from 8 am - 9 pm Monday to Friday in 1 hour sessions (1/2 hour increments from 12-2).  Bookings can be made up to 3 weeks in advance.  See their website for more details: http://www.botolph.org.uk/hall-court-hire/ 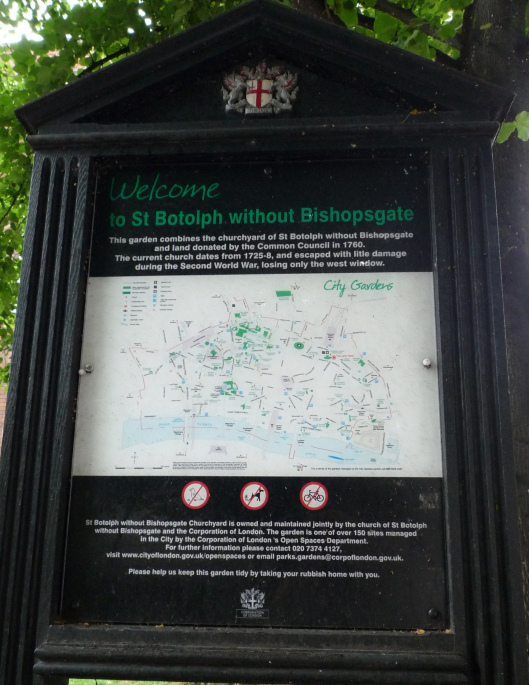 Founded in 675, it is the oldest church in the City of London.  It contains a Saxon arch from the 7th Century.  This part of the church is the oldest surviving section of church in the City.  Founded by the Saxon Abbey at Barking it was for many years known as All Hallows Barking.  Traces of an old Roman building have been found in the crypt indicating it was built on a former Roman site.  The church is steeped in history - from an explosion caused by gunpowder stored in the basement that destroyed 50 nearby homes in 1650, to its surviving the Great Fire of London, to its reconstruction after devastation from German bombing in WWII.  Its survival from the Great Fire was attributable to the actions of Admiral Penn whose naval brigade demolished properties around the church to create a fire break.   During the Great Fire Samuel Pepys watched the fire from the steeple Admiral Penn was the father of one of the founding settlers of America - William Penn, for who Pennsylvannia is named.  William Penn was baptized here in 1644.  John Adams, the 6th President of the US, was married here in 1797. The Crypt:  The church has a museum called the Crypt Museum, containing portions of a Roman pavement, which together with many artifacts, was discovered many feet below the church in 1926. The exhibits focus on the history of the church and the City of London, and include Saxon and religious artefacts.

Templar Connection:  Of particular interest are the altar stones in the Undercroft Chapel (formerly ‘Vicar’s Vault’).  These stones came from the Richard Coeur de Lion Chapel within the famous Templar Castle Pilgrim in the Holy Land.  Known as Atlit (or Athlit) Castle also, the remains are now called Chateau Pelerin and are located on the northern coast of Israel near Haifa.  Construction began in 1218 during the fifth crusade and once completed it could hold 4000 troops.  This was the last foothold of the Templars in the Holy Land but it was lost shortly after the Fall of Acre in 1291.

Visiting:  The church is open daily from 8-6pm (10-5 on weekends).  There are regular guided tours and a bookstore for gifts.  Events are held throughout the year, including regular Thursday lunchtime organ recitals, plays and musical events.  Check their website for more details:  http://www.allhallowsbythetower.org.uk/