At its height, the East India Company was one of the largest and most successful companies in the world.  With its own private army it controlled much of India and brought back to England a wide variety of goods and produce.  These items needed to be stored somewhere, and the East India Company amassed substantial property holdings in London.  Among these holdings were warehouses - several of which have been restored and repurposed as office, retail and residential spaces known as  Devonshire Square.  Located in the area between Leadenhall and Spitalfields, Devonshire Square with its 12 Grade II listed buildings is worth a visit for both its historical significance but also for its calm courtyard, food choices and shopping. 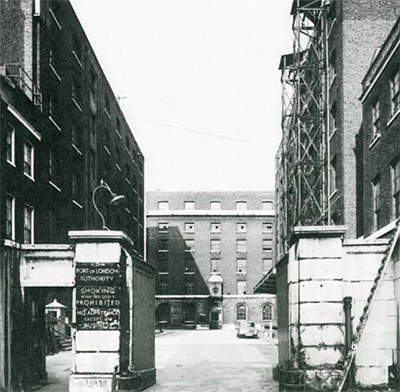 East India Company warehouses when owned the the Port Authority

History:   In the 1700’s this area around New Street (across the street from Liverpool Street Stn) was covered with tenements, craft workshops and small industries.  In 1768 The East India Company bought this land and built its first warehouse to store raw silk, piece goods and textiles from Bengal.  This building was named Old Bengal Warehouse. The East India Company continued buying land in this area and building warehouses until 1820.  By now these warehouses covered the area occupied by Devonshire Square Estate today.

When the East India Company’s monopoly on trade with China ended in the 1830’s, the warehouses were sold to the St Katharine Dock Company.  In 1909 they were sold to the Port of London Authority (PLA) which was at that time the largest owner of warehouses in the world.  These warehouses around New Street and Cutler Street were used by the PLA to store their most valuable items - including ostrich feathers, china ware, oriental carpets, cigars, silks, spices, perfumes and tea.  As the tea business was transferred to the docks in the 1950s these warehouses started storing bonded alcohol, such as wine & sherry.

Warehouses away from the ports lost their significance by the 1970s and the complex was sold to Standard Life Assurance Company.   Redevelopment retained the facades of the warehouses, though the interiors were upgraded. Original features were retained including stone stairs, iron columns and even the original East India Company clock case. A peaceful fountain in the Western Courtyard

Today:  In 2006 the property was sold again and a more cohesive complex of buildings, offering offices, housing, shopping and dining emerged.  A new high level roof was installed over the Western Courtyard creating a peaceful usable space year-round.  An archway from the Western Courtyard allows you to view the other main portion of the development around the Central Courtyard.  New landscaping and lighting have improved the overall feel of the area.  New Street was pedestrianised and leads you through an archway into the campus environment. The Magpie Pub on New Street

A pub of note in New Street is the Magpie which has its own unique history - perhaps the subject for another post - but in brief it used to be an ambulance station.  In fact at the beginning of the 20th Century it housed the only ambulance that served the whole City of London at nights and on weekends.  It was also founded by a family that were gin makers on Three Mills Island - so worth a visit.

These original East India warehouses along New Street are now called the Bengal Wing and the Tapestry Building.  They have shops and dining with housing above.  Each building in the complex has a theme that links it to the East India Company’s past.  So if you walk into the lobby of any of the buildings visual cues will connect you with silks, spices, teas and feathers. For a full list of all the dining, shopping and drinking spots, visit their website at: http://www.devonshiresq.co.uk/