Located at the northern end of Soho, between Carnaby Street and Oxford Street is the wonderful Photographers’ Gallery.  Considered Britain’s leading centre for contemporary photography, the gallery reopened at this location in May 2012.  Previously the gallery was located on Great Newport Street where it was founded in the early 1970s.  Today the new gallery - housed in an early 20th century warehouse - benefits from the work of architects O’Donnell and Tuomey who transformed the space into a modern multi-level gallery perfectly suited to its mission of bringing contemporary photography to the public.

To cement its position of authority in the world of photographer, Photographers’ Gallery awards the annual Deutsche Borse Prize considered the medium’s equivalent to the Turner.  The entrants are usually exhibited in the spring. The Gallery:  There are three floors of gallery space, as well as a cafe, bookshop, educational space and an area selling prints.  There is also a small outside space for periodic displays.  Within this largest public gallery in London dedicated to photography visitors can expect to see the work of new artists as well as those already established in the medium.  Over the years the gallery has been the first to exhibit in England artists including Robert Capa, Sebastiao Salgado and Juergen Teller. 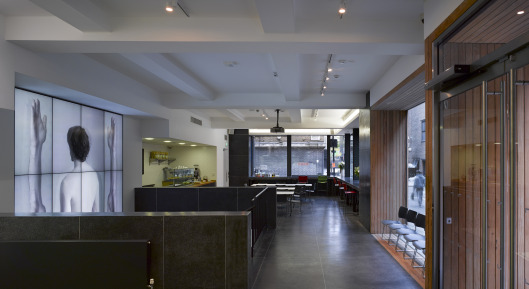 Events & Exhibitions:  At any given time there are generally multiple exhibitions occurring.  It appears that most exhibitions last up to 2 months.  For current exhibitions see their website at:  http://thephotographersgallery.org.uk

In addition, there are various events including artist talks, guided tours, and workshops.  The workshops may range from topics such as collecting photography, to using your own camera, to history of photography and to guidance on critiquing the work.  The full calendar and schedule is on their website.

Visiting & Cafe:  Opening hours are daily: 10-6 except Thu: 10-8 and Sun: 11.30-6.  Admission is free.  There is a café on the ground floor, opening at 9:30 on weekdays (otherwise following gallery hours).  It has a changing menu of fresh pasta, sandwiches, salads, soups and cakes from Soho’s Lina Stores. Note: All photographs courtesy of The Photographers’ Gallery.

8 thoughts on “The Photographers’ Gallery ~ the largest public gallery of its kind in London.”