Located on the south side of Gray’s Inn Square, this Chapel provides a quiet place to escape to.  While the Chapel was essentially rebuilt after the Blitz, it’s uniqueness and location make it well worth a visit.  In addition, a visit here draws you into the heart of Gray’s Inn - an area bypassed by many visitors and locals alike.

History:  Originally the chapel was housed in the Manor house for John Le Grey located here and dates back to 1315.  The records of the Inn, which run continuously from the 16th century, document that the chapel has been continuously operated on this site, though rebuilt and expanded several times.  In 1893 the building was restored in a late gothic style and remained that way until it was bombed in 1941. Today:  The present chapel was built in the years following the Second World War to the designs of the late Master Sir Edward Maufe, the architect of Guildford Cathedral.  It was larger than before, and the original stained glass windows, which had been removed for safety, were replaced.  The east window, originally erected in 1895, commemorates four Archbishops who were either members or preachers of Gray’s Inn: they are Whitgift, Juxon, Wake and Laud, and the centre panel depicts Thomas a Becket.  The chapel also contains, by the north door, the incomplete remains of a mediaeval holy water stoup. 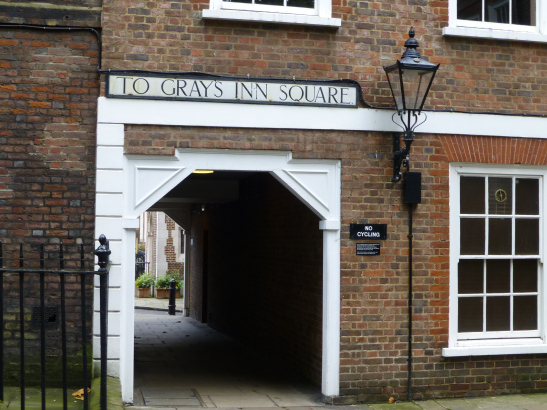 Visiting:  The Chapel is generally open daily during the week, and on certain Sundays for services.  Visit their website for more details.  There are occasional weekday services, and in June 2014 a series of four concerts will be held on Tuesday evenings at 6:30pm.