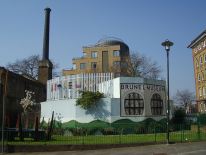 Visit the Victorian ’8th Wonder of the World’ and one of the greatest engineering feats in London’s history.

The three generations of Brunel’s (Marc Brunel, his son, Isambard, and his grandson Henry) provided & influenced many of Britian’s greatest engineering feats including the Thames tunnel, the Great Western Railway, Hungerford & Clifton suspension bridges, Tower Bridge and Blackfriars Railway bridge.  The Thames Tunnel was the only project both Marc and his son, Isambard, worked on together.  For Isambard, aged 19, it was his first project in a long and successful career.  The Brunel Museum focuses on the Thames Tunnel - the first tunnel to pass underneath the Thames (or any navigable river in the world for that matter) - and provides the opportunity to visit the tunnel and entrance hall.

ipping.  In March, 1843, a full 18 years later, the tunnel finally opened.  Considering the technological limitations of the early 19th Century, its completion was almost miraculous.  Challenges were numerous including five major collapses and flooding from the Thames.  When completed it was considered the 8th Wonder of the World.  Within 4 months of its opening over 1 million people had walked through the tunnel.  Considering London’s population was only 2 million this is an outstanding number of people.   Given how long the tunnel had taken to build, and the great expense incurred, the necessary ramps to facilitate horses and carts to descend into and out of the tunnel were never built and the tunnel became a white elephant.  22 years later (1865), a railway company purchased the tunnel and by 1869 connector tunnels to the entrance and exit allowed steam trains to pass through.  Finally the tunnel served a purpose - a purpose which just changed again in 2010 as it changed to be part of the new London Overground Orbital rail line.

The Brunel Museum is housed in Marc Brunel’s ‘Engine House’. It contains an exhibition of display panels, videos, models and original artifacts.  The Engine house was built a year before the Thames Tunnel opened, and was originally used to house the steam engines that drove the pumps to keep the Thames Tunnel dry.

While London Overground utilizes the tunnel for its services, they do continue to allow periodic access to view the tunnel on organized tours.  These visits involve the floodlighting of the tunnel for both views from platforms as well as a special floodlit train ride through the tunnel.  See website below for more details and dates on these special events as they change.

The Brunel Museum is open daily from 10-5.  Minimal admission fees apply.  There is a cafe and a bookstore on site.   See their website for more details on special tours and events:  http://www.brunel-museum.org.uk/

This entry was posted on September 14, 2012 by LondonUnveiled.com in Museums (Historical), Southwark and tagged Southeast London.