Arguably one of the best views in all of London

When most people think of transportation in London, the tube, the double-decker bus and the black cab all come to mind.  However, one form of transportation that is often forgotten is the ‘River Bus’ (not one of the tourist boats).  The Thames Clippers are the fastest and most frequent boat fleet on the river. Thames Clipper service is provided through a fleet of 13 boats that provide a surprisingly fast way to get from one end of London to the other.  With so much of what London has to offer clustered around the Thames, the River Bus service, these boats provide commuters and sightseers with a fast way to travel around the capital on arguable the most scenic route in London. While you can’t stand outside at the front of the boat, the rear is open and on a pleasant day is a great place to enjoy the sights and the fresh air.  The inside has comfortable seats, is climate controlled and has free wifi!  There are even toilets.  As catamarans the ride is very stable and even those sensitive to motion will likely find it easy to enjoy the ride. On board coffee & snacks

The Commuter Boats:  With no tour guide and no commentary, these fast boats still offer a degree of luxury, with onboard snacks and drinks (from Costa coffee), comfortable seating (always a seat unlike the tube!) and undeniably great views - even for the hardened Londoner.  The Thames Clipper high speed catamarans depart from all major piers every 20 minutes from about 8:30am until 9pm.  Boats start around 6am (weekdays) and run as late as 11pm but less frequently during those hours. Boat service can be obtained as far west as Putney and as far east as Royal Arsenal Woolwich in the east.  However, the most efficient commuter route is from either Embankment or London Eye to Greenwich, with stops at Blackfriars, Bankside, London Bridge, Tower, & Canary Wharf. There are a few other piers they’ll stop at during peak hours, but you’ll need to ask to get off or wave at the boat from the pier!  Its only 35 minutes from London Eye to Greenwich.  Compared to riding on the Jubilee line I’d ride the Clipper anytime. 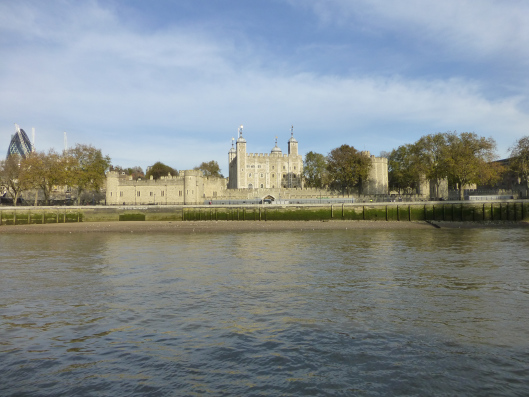 The Tower of London from the Thames Clipper

History:  The Thames Clipper service started in 1999 with one boat.  Originally usage was about 1500 per week.  Now with 13 boats, usage is up to 8500 passengers a day (versus about 2 million/day on buses, and 3.5 million tube journeys/day).  Most boats are designed by an Australian company - Aimtek. One of the Thames Clipper fleet

Costs:  If you use an Oyster card when you buy your ticket (no tap in / out - must buy a ticket at the booth) then you receive a 10% discount.  You can also buy books of 5 tickets to save queuing time.  Oyster discounts for the Commuter boats are £5.85.  Under 5′s are free. 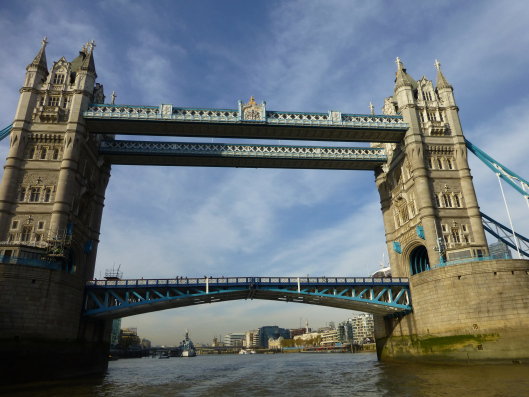 An experience that never fails to impress - going under Tower Bridge.

Its a great way to take visitors to London on a scenic tour - but you’ll be the tour guide.  If you’ve never ridden these boats yourself its a ‘must do’.  It surprises me how underutilized they are.