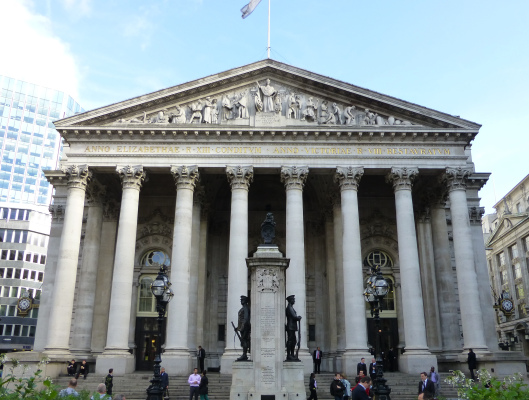 Right in the very heart of the City is the Royal Exchange.  A wonderful building, with a great history that is as vibrant today as it ever was.  While maybe not one would expect for a topic on a site that focuses on ‘London Off The Beaten Path’ I find that many people do not know the history of this building and others think it is still a stock exchange or part of the Bank of England.  With many visitors to London spending most of their time in the West End, it is worth reminding people that for its history, its shops and its restaurants, a trip to the Royal Exchange is well worth it.  Sitting at the Grand Cafe, with a cocktail or glass of champagne in hand, while enjoying the ambiance of one of London’s most magnificent buildings is an experience not to be missed. The north entrance to the Royal Exchange

History:  The building of the Royal Exchange was first completed in 1565 and in 1571 it received its ‘Royal’ title and obtained a licence to sell alcohol from Queen Elizabeth.  It was the vision of Thomas Gresham who wanted a central facility for commerce in the City of London to mirror that of the Bourse in Antwerp.  The original bell tower summoned merchants at 12 noon and 6pm to come and trade.  Gresham realized that it would be hard for him to make money solely by facilitating a place for trading, so he built two floors of retail shoppes - about 100 kiosks in all - that paid rent to him creating a profitable business.  In effect, he had built the world’s first shopping mall. The Grand Cafe at the Royal Exchange

This original building was destroyed in 1666 during the Great Fire.  Within 3 years it was rebuilt.  While stock traders certainly used this facility (in addition to coffee houses) they were expelled from the Royal Exchange in 1698 due to their rowdy behaviour.  Insurance traders, including those from Lloyds, did business here and stock brokers became regulated through licences - which started to create the basis of an organized stock market.  This new building survived until 1838 when fire again ravaged the building.  In 1844 the third iteration of the Royal Exchange was opened by Queen Victoria - the structure we see today.  This rebuilt structure now had a roof that covered what used to be an open courtyard.

The building started trading stocks again in January 1845.  When WWII started in 1939 trading at the Royal Exchange was suspended for about 9 months.  During the war the building was a survivor, escaping the damage inflicted by the Blitz.  By 1972 all stock trading left the building as the London Stock Exchange had its new premises opened by Queen Elizabeth II. 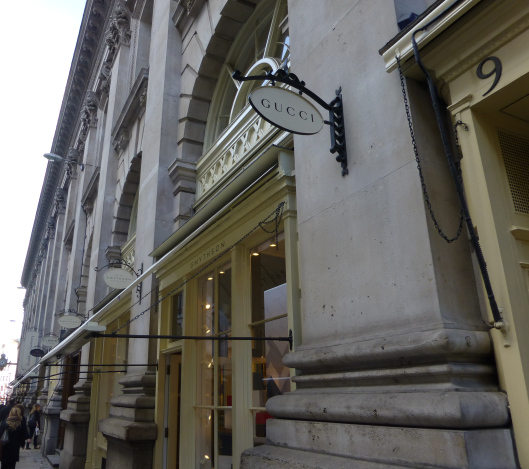 Shops at the Royal Exchange

The most recent renovations were in the 1980s when the roof was restored and two floors of new offices were added, and in 2001 when it was extensively remodelled by architects Aukett Fitzroy Robinson, resulting in the addition of new boutiques and restaurants.

For a brief period of 9 years in the late twentieth century, the Royal Exchange reverted to its use as a centre for financial trading as the home to the London International Financial Futures Exchange (LIFFE). Today:  The Royal Exchange is to some degree back to the way it once was - a shopping mall - though a very upscale one.  The shops are open from 10-6, though some restaurants open at 8am and stay open until 11pm.  In the centre of the courtyard is the Grand-Cafe, with its oval bar, and all day dining.  You can make reservations for breakfast, but otherwise its no reservations. On the mezzanine level of the Royal Exchange is Sauterelle a more upscale French restaurant with a great view over the Grand Cafe and central courtyard.  Shops include sellers of watches, art, clothing and antiques, among others - most are generally considered ‘high end’.