Located just steps from Piccadilly Circus is a bookstore with such a rich history that it has become a London literary landmark.  For one store to have sold a Gutenberg Bible, Shakespeare’s Folios and Lord Byron’s manuscripts would be surprising.  But not only has Sotheran’s done all this it has done much more in addition to being the oldest antiquarian bookstore in the world.  It bound the infamous Rubaiyat of Omar Khayyam - the most expensively bound book in the 20th Century - that then went down with the Titanic.  It was the primary source for the American collector H. C. Folger’s Shakespearean library.  Sotheran’s also purchased Audubon’s Birds of America at auction in 1959 for a record price - and today it is still the most expensive printed book in the world at auction.  For an expanded list of some of the more significant events in Sotheran’s history please see the timeline below. Given this unique history and its place in the literary world, a visit to Sotheran’s is like spending time in a great library - but with the knowledge that everything is for sale.  Whether you want a classic from the 19th Century or a first printing of a Tintin comic book, there is something here for everyone.  In addition, a wonderful collection of prints and posters is in the downstairs room which is well worth a visit. 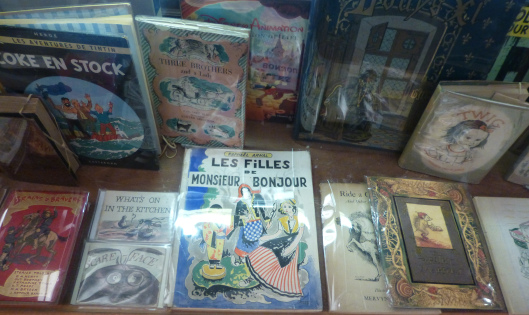 History:  Sotheran’s was founded in York in 1761 and established in London in 1815.  In the early years they bought several important libraries, including that of Lawrence Sterne. They also had a print works that used copper engravings and they even sold wine. Having a basement as a wine shop and the ground floor as a bookshop might seem odd, but the store claims there has always been a connection between antiquarian booksellers and alcohol! Sadly the wine is long gone.  In London the downstairs houses a wonderful print gallery. Chronology - a few of the more significant dates:

1761      Founded in York
1768      Purchased the Library of Lawrence Sterne
1815      Established in Little Tower Street in the City of London by Thomas Sotheran
1862      Published a catalogue which included a copy of the first folio of Shakespeare for £53
1867      Charles Edmonds of Sotheran’s discovered Shakespeare’s 1599 Venus and Adonis in an attic.
1878      Purchased the library of Charles Dickens (two catalogues were devoted to its description)
1892     Purchased the famous Althrop Library for £250,000
1898      Purchased part of the library of WE Gladstone
1901      Appointed booksellers to King Edward VII
1907      Purchased Bishop Gott’s Library, Bibliotheca Pretiosa (No 671), which included a set of the first four folio editions of Shakespeare
1910      Commissioned ‘The Great Omar’, a binding which took Sangorski nearly two years to complete and was set with 1,050 jewels; it went down on Titanic
1936      Moved to Sackville Street
1943      Agents for the sale of the ‘Sir Isaac Newton Library’, purchased through Sotheran’s by the Pilgrim’s Trust.
1959      Purchased Audubon’s Birds of America Today:  Their General Antiquarian and Literature department covers a wide range of subjects from early Bibles to 20th Century Private Presses.  They specialise in first and important editions of English literature from the 17th to 20th century, library sets, fine bindings, Churchill and private press books.  They have sections on sports, economics, children’s and illustrated books.  In the children’s section there are generally collectible books by Roald Dahl and Maurice Sendak, as well as those by famous illustrators such as Arthur Rackham.  There are also a lot of books on travel and exploration.

Other Services:  In addition to selling items in stock, Sotheran’s will help you build a library, repair or restore old books, choose that perfect gift and mount or frame prints or pictures.  Downstairs is a well-stocked gallery with a wide selection of original antique engravings, lithographs and etchings. Periodic exhibits focus or highlight particular genres or works.  For example, a current new catalogue and exhibition of vintage travel posters has been recently put together. 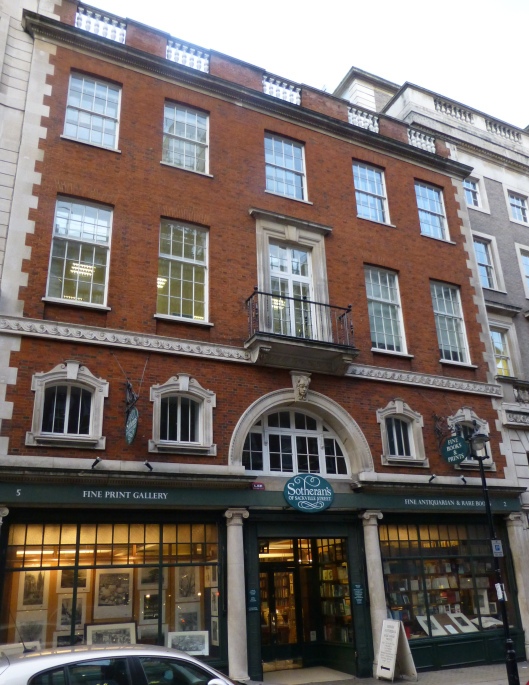