The American Bar at the Stafford ~ a unique cocktail bar with a great history.

Located on one of my favourite hidden courtyards in London is the ‘American Bar’, a truly unique place and well worth a visit.  This bar had previously been referenced briefly in one of LondonUnveiled’s photo challenges, but it is worthy of a full write up.  So if you’ve not been, put it on your to-do list. When you visit I recommend entering through Blue Bell Yard - this atmospheric cobblestone courtyard is the perfect way for you to discover the American Bar for the first time.  If you really want to have a ‘bar’ experience then pair a visit here with a visit to nearby Duke’s Bar - click here to read about this spot. History:  In the 1930s the growth in the transatlantic ocean liner business meant more Americans started to visit Europe.  The drinks New Yorkers were used to were quite different and arguable more creative than what was common in London.  To create bars that catered to these tourists drinks such as the Manhattan, Martini and Sidecar were added to the menus.  To market these welcoming bars many establishments were renamed ‘The American Bar’.  Today you can still find two historic American Bars - one here, at the Stafford Hotel, and one at the Savoy.  For traditionalists sadly the Connaught Hotel has renamed their previously famous American Bar as the Connaught Bar. 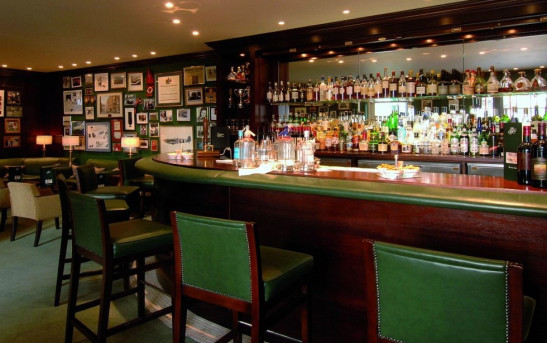 The Decor:  The wonderful collection in the bar of global tchotchkes, including a lot of Americana, started from a simple gesture in the 1970s.  An American guest gave the charistmastic barman, Charles Guano, a small wooden carving of an eagle.  This was followed by other gifts by global travellers.    However, it is the bars connection with servicemen from World War II that really provides its uniqueness.  During the war the American Eagle Squadron were regulars here, along with many Canadian military officers.  As they and they families retracted their steps over the years they have left behind emblems, photos, ephemera and mementos. Highlights of the Collection:  There are several pictures of Nancy Wake, a New Zealander who joined the Special Operations Executive and become one of the highest decorated woman from WWII.  Her code name was ‘White Mouse’ and she supported the French Resistance, parachuting into France in 1944 and working closely with them in the front lines.  At the time the hotel was run by one of the senior leaders of the resistance, Louis Burdet, whose code name was ‘White Rabbit’.   During the war years clearly plenty of spy-craft occurred here!  If you have time I recommend some background reading about her.   She is a key part of this bar’s history and even moved into the hotel in 2001 for 2 years.

Other items in the bar include a photo from 1995 shows all then living holders of the Victoria Cross who met here that year.  There is a photo of Spitfire fighter plane signed by three of the most famous Spitfire pilots of its day.  From the ceiling hang numerous models of airplanes mostly given by the pilots who actually flew them during the war.  More recent photos include one of Margaret Thatcher, who was a regular here, and one of the iconic image of New York firefighters raising the US flag after 9/11.  There is enough here for everyone to find something of interest. 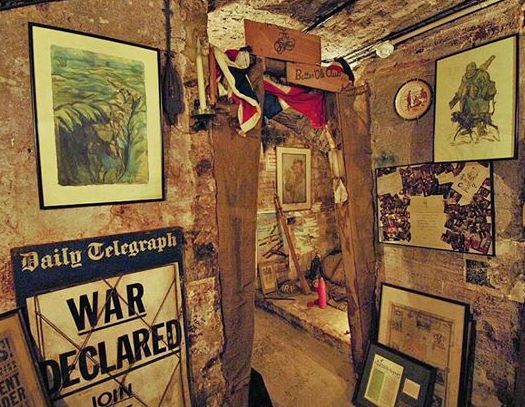 The collection in the cellar

The Wine Cellars:  Of note also are the wonderful wine cellars underneath the courtyard.  Almost 400 years old, these vaulted cellars can be used as a unique setting for private dining or wine tastings.  In addition to the 8000 bottles here, there is also a small extension of their collection here, which is mostly focused on recreating the feel of a bomb shelter by displaying some of the WWII related items donated over the years .  See if you can negotiate to get a view!

6 comments on “The American Bar at the Stafford ~ a unique cocktail bar with a great history.”