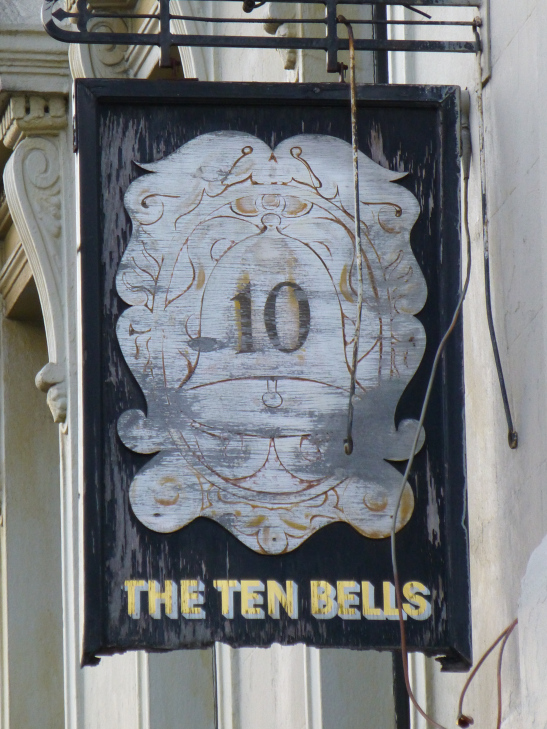 The ‘Ten Bells’ pub is a Grade II listed building that has a significant connection with Jack the Ripper, but is also worth a visit for its interior decorations and murals.  In addition, it is located adjacent to Spitalfields Market - a great place to visit.

History:  It has been in this general location since the mid-1700s.  It moved to its current location in the 1850s after its original location (12 Red Lion St) was demolished.  Now standing on the corner of Commercial Street and Fournier Street, it is arguably the most infamous pub in Ripper folklore. The pub’s name has changed over the years.  Originally it was the ‘Eight Bells Alehouse’ which was certainly chosen due to its location next to Christ Church, Spitalfields - a wonderful Nicholas Hawksmoor church (Hawksmoor was at first an apprentice under Christopher Wren).  In 1788, Christ Church installed new bells, increasing the set to 10.  Records from the late 1700s show that the pub had changed its name to ‘The Ten Bells’.  While a fire in the steeple in the early 19th century resulted in a reduction back to eight bells, the name stuck… mostly.  There was a brief spell (1976-1988) when the owners of the pub renamed it ‘The Jack the Ripper’.  Certainly a marketing ploy and arguably a crass decision.  Successful lobbying of the owners resulted in the reversion of its name back to ‘The Ten Bells’. 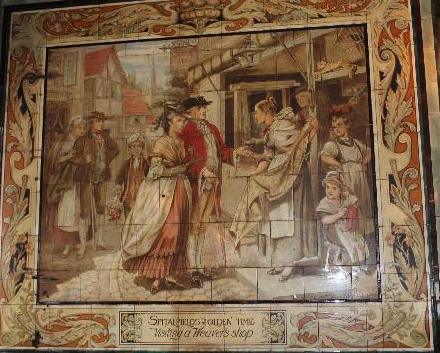 The 2010 restoration of the pub interior brought back to life the decorative interior that harkens back to Victorian gin palaces.  There is also a significant 19th Century mural - The Spitalfields in ye Olden Time - visiting a Weaver’s Shop and a newer mural - Spitalfields in Modern Times. Jack the Ripper:  Two of the victims of Jack the Ripper are linked to the Ten Bells.  It is generally accepted that Annie Chapman drank at the pub before she was murdered on the 8th September 1888.  Witnesses placed her there drinking as late as 5am that morning.  Her body was found later.

Mary Jane Kelly is believed to have worked as a prostitute from the vicinity of the Ten Bells.  On 9th November 1888 she became a victim of the Ripper - his last.  One witness indicated he had seen her at the pub earlier that day.

In the graphic novel, From Hell, the Ten Bells is mentioned and it was also used in the film adaptation starring Johnny Depp.  In the film, Depp, playing the role of Inspector Abberline, has a drink with future Ripper victim Mary Jane Kelly. ‘Upstairs at the Ten Bells’

Today:  In addition to the pub, the Ten Bells also houses a restaurant - ‘Upstairs at the Ten Bells’ - that serves modern seasonal British pub food.  It is highly regarded and reservations are recommended.  For the modern art lover, there is a great neon piece by Tracey Emin titled ‘Keep Me Safe’ - a clever tie in given the pub’s history.