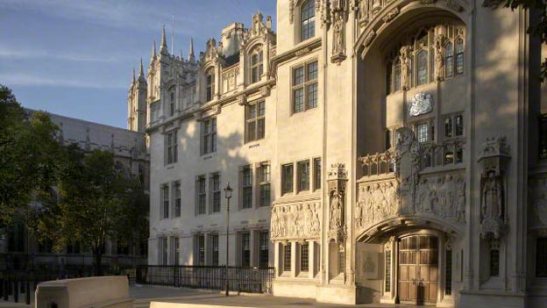 The Supreme Court is walked past by thousands of tourists daily who come to view Westminster Abbey or Parliament.  But few visitors or locals know that this building houses a wonderful array of activities.  Both guided and self-guided tours are available, wonderful art is on display, historical exhibits can be viewed and trials can even be watched. History:  Located on Parliament Square, it is possible to consider it a view of the four branches of British life - Parliament (legislative), the Treasury (north side / executive), Westminster Abbey (Royalty/church) and the Supreme Court (judicial).  This location was originally Thorney Island, the sanctuary grounds of Westminster, which was located in the delta of the Tyburn River where it joined the Thames.  Originally this site was home to a 13th Century belfry on the Abbey grounds. Lost many years ago its foundations were uncovered during the building of the current structure, which was opened in 1913 as the Middlesex Guildhall.  It housed two courts and the county offices of the Middlesex County Council.  In 1965 the County Council was dissolved and the building became used by the Crown Courts, with 7 court rooms and over 100 cells.  In 2003 when the decision was made to establish a Supreme Court, the search process for a suitable location selected this building.  Renovations ensued and in October 2009, the Supreme Court replaced the Appellate Court of the House of Lords as the highest court in the land.

Exhibitions:  On the lower ground floor a permanent exhibition presents both the history of the building and insight into the work and history of the Court.  Additional displays change periodically.  There is also a cafe and a shop.  All are located in what were originally the cells of the former Crown Court.

Art on Display:  Throughout the building various works of art are displayed.  The building is home to the Middlesex Guildhall Art Collection, a unique collection of portraits commemorating a number of former Lord Lieutenants, judges and Magistrates. Key works include the 1st Duke of Northumberland, painted by both Gainsborough and Reynolds, the latter in a Chippendale frame. A popular portrait is that of Sir John Fielding (1721–1780), a magistrate and social reformer, whose view that crime could be prevented by efficient detective work was incorporated into police practice. He lost his sight in 1740 was known as the ‘Blind Beak’. Allegedly, he could recognise up to 3,000 London criminals by the sound of their voices!

Bridewell Prison:  Of unusual note, and perhaps with a slight twist of irony, is that while you can enter the court through the front door, the “back door” is an historic remnant of an old prison.  While the stone gateway at the rear of the building is a folly it is all that remains of the early 17th century Westminster House of Correction or Bridewell later known as Tothill Fields Prison. The gateway was resited here by the Greater London Council in 1969.

This entry was posted on March 2, 2016 by LondonUnveiled.com in Westminster and tagged eat, free, landmark, london, West London.