The London Wall Walk ~ a bit of a treasure hunt! While most visitors to London (and perhaps locals) only see remnants of the original Roman London Wall adjacent to the Tower Hill tube station or in and around the Tower of London, there are actually many other remnants to view that provide a broader perspective of the original walled city that extend for about 2 miles.

London Wall History:  The wall was initially completed around 200 AD and defined what is often now considered the ‘City’.  In extended from Tower Hill/Tower of London in the south east to Blackfriars on the southwest corner. It extended approximately 2 miles, and used the Thames as the southern edge.   The wall remained mostly unchanged for 1500 years, although various additions and reinforcements occurred during those years.   The wall included 20+ bastions and a large 12 acre fort on the north-western edge - a location remembered through the name ‘Barbican’. Historians still debate its original purpose - whether to protect against the Picts or built by the Governor of London, Albinus, to protect Londinium from his rival Septimius Severus. 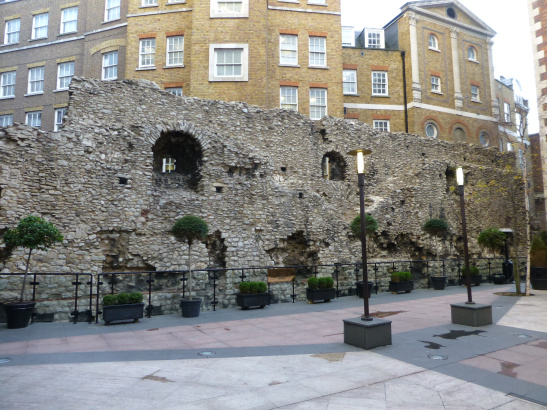 The Walk:  In 1984 the Museum of London set up the London Wall Walk with 21 tiled panels - many are now long gone sadly.  The original map they published can still be found online (image below).  I recommend printing out this map so you have the route to follow or use the Google map referenced at the end of this article. Panel 2 is in the garden area by Tower Hill tube station (entrance section) where there is a large section of Roman wall topped with later Medieval stonework. Also there is a statue thought to be of Trajan and a copy of a tombstone to Julius Classicianus found nearby. 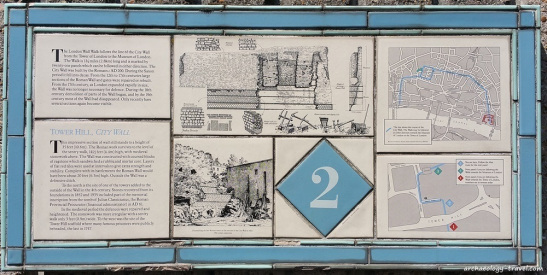 The 3rd panel, along with an adjoining informational panel can be found in the hotel courtyard, accessed from the east side of Coopers Row.  Even stepping away from the Tower of London to view this one section is worth the quick detour.  It is an impressive remnant that you can even walk through (first image at top of article) to view the wall from both sides. From here, many of the other panels are hard to find, and the sections of the wall arguably harder.  While some panels are missing or get moved due to constructions, some wall sections are within offices, in car parks or just unavailable to see.  But that said, view it like a treasure hunt!  I have put pictures below of some of the panels.  It is important to note you can no longer find all of them.  Use one of the maps referenced in this post to help you follow the trail. Of note, panel 8 and the wall it was attached to were destroyed by an IRA bomb in 1993.  See this link for more details: St Ethelburga’s IRA Bombing

Panel 10 has gone from the piece of ground alongside All Hallows-on-the-Wall where the Medieval section was used in the churchyard wall (though most of the wall above ground is modern, the Roman portion is below ground level) and the church vestry was built on the foundations of its tower.

Panels 15, 16 & 17 relate to sections which can be viewed from the gardens by the Barber-Surgeons Hall (access through Monkwell Square or from London Wall). The towers here were added in the Medieval period. Only Panel 15 still exists and is quite tucked away which relates to St. Giles Cripplegate. Section 17 can also be seen from the Museum of London’s viewing gallery.  In fact the area around the Museum of London has quite a few sections of wall to see.  Just south of the museum there are some sections along Noble St, and panel 21 relates to Aldersgate. The sites between the Museum of London and Blackfriars never had panels - but the walk is still worth it as there are remains to be found and various informational markings or plaques along the route.

Location:  A map has been made available through Google Maps that is interactive.  Click here for more details.

3 comments on “The London Wall Walk ~ a bit of a treasure hunt!”