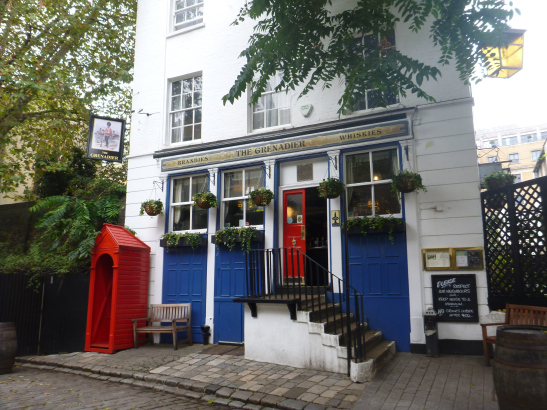 The Grenadier Pub is a wonderful pub to visit and every local or visitor to London alike should try to make it here at least once.  Hidden away on a secretive mews, this pub is hard to find for those not in the know, yet it is only steps from Harrods and Hyde Park.  With a wonderful history and location, this pub is also considered one of the most haunted pubs in England.  Next time you are in Belgravia or Knightsbridge make a detour and have a drink or a bite at the Grenadier - if you can find it!

History:  In 1656, the 1st Regiment of Foot Guards was formed and their barracks was based in this part of London (not far from the Hyde Park Barracks which is still there).  In 1815 they successfully fought off the French Grenadiers at Waterloo.  Their success was honored by a Royal Proclamation renaming the unit as the “1st or Grenadier Regiment of Foot Guards”.  This pub building was part of these Regimental barracks.  Built in 1720 it was home to the Officers Mess.  Famously known as the Duke of Wellington’s Officers Mess (as he purportedly frequented it), its visitors included King George IV. In 1818, it became opened to the public as a licensed premise, then known as ‘The Guardsman Public House’.  It was later renamed ‘The Grenadier’ though the reason for the name change is unclear even though some claim it is to do with its ghost (see below). One of the small restaurant rooms

Throughout the pub memorabilia, photographs and other military related artifacts provide a great ambiance. Haunted:  The legend claims that in the early years of the pub, a young Grenadier soldier was caught cheating at cards here and was beaten to death both as a consequence of his cheating and for his inability to pay his debts.  Known as Cedric, the ghost and associated paranormal activity are generally considered more visible in September so it is assumed this was the month of his death.  There have been many recorded unexplained events here.  These include a solemn, silent ghost that has been seen creeping slowly across the pub. Objects seem to either disappear or move without explanation. Tables and chairs rattle inexplicably, and there has been an icy chill that befalls the pub that can last for days. Footsteps have been heard wandering around empty rooms, and every so often, low sighing moans are heard from the depths of the cellar. Famously, on one occasion, it was reported that whilst the Chief Superintendent from New Scotland Yard was enjoying a drink in the pub, smoke began to waft around him. As he reached towards the smoke, it is said that an invisible cigarette burnt his hand.  One visit by a BBC film crew even captured an image of the ghosts face in the window. These peculiar happenings are attributed to the murdered Grenadier returning to the pub.

On the ceiling throughout the pub you will see money glued there, most of them with notes from the donor.  The original reason why money was affixed here was as a token of goodwill to help pay off Cedric’s debt.  The tradition continues. 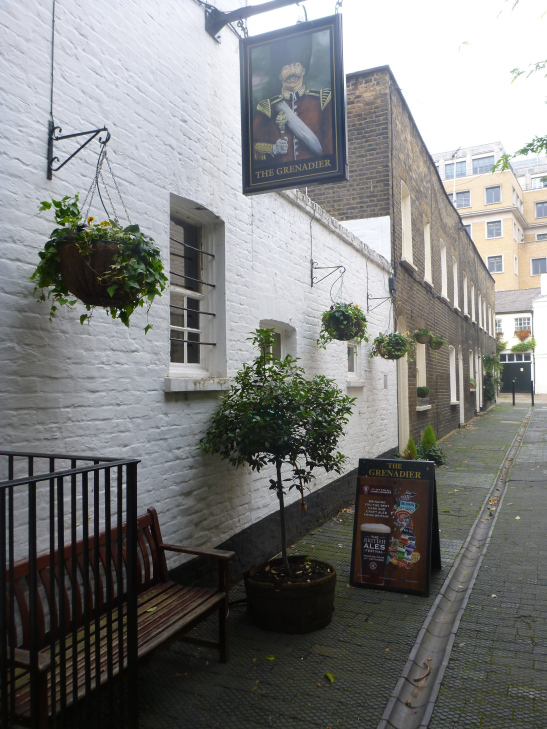 Looking up Old Barracks Yard from the pub

Hidden:  Located on Wilton Row (a mews street), the pub can be reached by cutting through on Old Barrack Yard off Knightsbridge, or by walking up Wilton Row off Wilton Crescent.  Both are hard to do.  The Old Barrack Yard entrance off Knightsbridge is easy to miss and poorly signed.  The entrance off Wilton Crescent says ‘Private, No Entrance / Private Mews’ one a railing mounted sign, and the street name has been removed.  So when you do find the pub you will feel rewarded! The approach to the pub along Wilton Row

Food & Drink:  The pub has a small bar with a reasonable selection of real ale.  Food is served in two small dining areas.  Pleasantly the menu is not generic and food does appear to be made in house.  The food quality was above average for a pub on my most recent visit.

This entry was posted on October 18, 2014 by LondonUnveiled.com in Historic Buildings, Pubs of interest, Restaurants, Westminster and tagged Central London, drink, eat, ghost.