The Old Operating Theatre ~ the oldest in Europe! The Old Operating Theatre is an unusual museum located in the ‘herb garret’ (a garret is a top floor or attic) of St. Thomas’ Church in Borough.  Originally part of the old St. Thomas’ Hospital, this is the oldest operating theatre in Europe.  Today it is a fascinating museum and makes one appreciate that you did not need medical treatment years ago! History:  When St Thomas’s Church was rebuilt in 1703 it had an unusually large garret in the roof space.  Adjacent to the church was St. Thomas’ Hospital.  Since storage areas for hospitals were generally the basements or attics, it was a natural place to store something.  General theory is that attics were less vulnerable to rats making this a good place for the hospital to store its medicinal herbs.  In addition, they were less damp and the large timbers supporting the roof acted as a natural drying agent.  Thus St. Thomas’ Apothecary used this ‘garret’ to store and cure their herbs.  While its early history is not specifically known, records do refer to it as the ‘Herb Garret’ from 1821 onwards.

St. Thomas’ hospital had built its South Wing Wards around the church and so the open space also presented itself as a viable location for an operating theatre also.  With the 1815 Apothecary’s Act, apprentice apothecaries had to attend and learn at public hospitals.  Consequently a theatre that allowed viewing became necessary.  In 1822 part of the ‘Herb Garret’ was converted to be such an operating theatre. 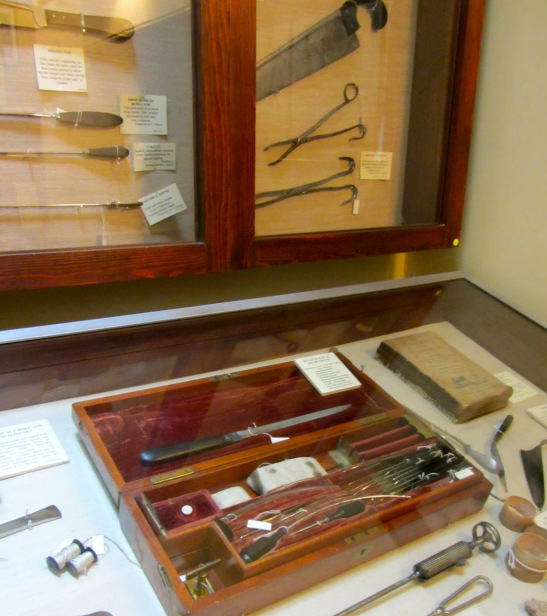 In 1859 Florence Nightingale set up her nursing school at this hospital.  However, in 1862 the Charing Cross railway company offered to buy the land.  With Nightingale’s influence, the hospital agreed and it moved to Lambeth.  The land was converted to what is now London Bridge railway station (among others), and St. Thomas’ Hospital moved adjacent to Lambeth Palace.  The Florence Nightingale museum is located there at this newer location - the subject of a future post.  Once the hospital moved, the herb garret and operating theatre were abandoned.  They were not discovered until almost 100 years later in 1957.  Now restored, they are a remarkable place to visit. The Patients & the Surgery:  While quite distressing to look at, the museum does have a broad array of medical devices and equipment from the early 19th century.  Bone saws are particularly disturbing especially when you consider that the patients (only women at this location) would not have benefited from anaesthetics!  Other items include those related to bleeding, childbirth and cupping.  Patients endured the procedures because there was no alternative, and accepted being treated in a ‘theatre’ with students watching because they could not afford private care.  Wealthy patrons would have had surgeons come to their home - still without anaesthesia but at least in private!  All the patients came from the women’s surgical ward in Frederick Block (now the Post Office) which was generally on the same level as the theatre.  Thus it was fairly easy to move patients in and out of the theatre. 6 comments on “The Old Operating Theatre ~ the oldest in Europe!”