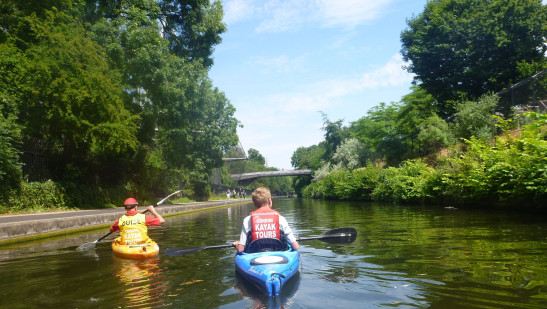 Consistent with the goal of LondonUnveiled.com to highlight some of the lesser known activities, places and history of London, an afternoon spent kayaking on Regent’s Canal seemed an interesting premise.  The experience was certainly unique.  Not yet a regular sight or activity, kayaking on the canal does afford one an immediate escape from the noise and traffic of central London as well as having a different perspective of many familiar sites.  Paddling up to Camden Lock and watching a canal boat rise from the lower level in front of you while throngs of tourists and locals alike soak up the Camden atmosphere above certainly provides a fresh perspective on this busy part of London.

But perhaps most surprising was the tranquility on the stretch of canal that parallels the London Zoo and aviary.  With lush greenery and trees on both sides, and only a few joggers or cyclists quietly passing on the tow path, you can easily forget that you are in the heart of London. 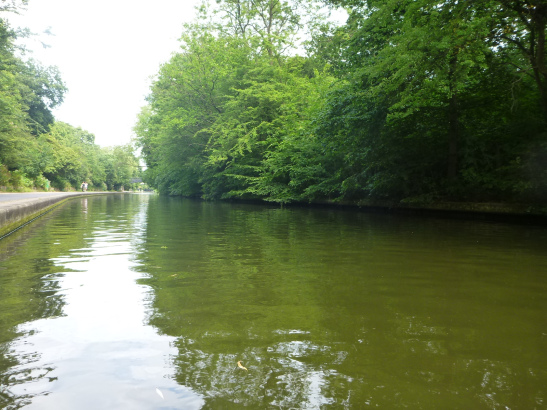 A peaceful stretch of Regent’s Canal near the Zoo.

While the water is fairly murky and green, there was no unpleasant smell and very little rubbish.  Our guide advised us that the water is clean enough for fish and other aquatic life and that each year the water quality continues to improve further enhancing the appeal of the canal as a recreational spot.

History:  The Regent’s Canal was built to link the Grand Junction Canal’s Paddington Arm, which opened in 1801, with the River Thames at Limehouse. One of the directors of the canal company was the famous architect John Nash. Nash was friendly with the Prince Regent, later King George IV, who allowed the use of his name for the project. The Regent’s Canal Act was passed in 1812 and the company was formed to build and operate it. The canal was opened in two stages, from Paddington to Camden in 1816, and the final section of the canal connecting to Limehouse in 1820.  Over the years having adequate water to support the canal and lock system was a challenge that was ultimately solved by the creation of the Brent Reservoir.  The last horse drawn commercial traffic was carried in 1956 following the introduction of motor tractors three years previously. By the late 1960’s commercial traffic had all but vanished.

The Feng Shang Princess - a floating restaurant on the canal.

How to enjoy the Canal:  There are several ways to gain access to the canal other than just launching your own canoe or kayak.  While a few touristy boats do transport people (primarily Jason’s Trip or the London Waterbus Company) my sense is that the experience would be nothing like paddling at your own pace.  While we booked our outing through London Kayak Tours (which provides a guide and brings the kayaks to the launch site where you meet them), there are other places that can get you on the canal.  These include the Pirate’s Castle, and the Regent’s Canoe Club.  But perhaps one of the best resources for all the available choices can be found by visiting the Canoe London website. Located at:  Various departure points depending on who you book with or how you access the canal.  Our access point with London Kayak Tours was at Prince Albert Road & Ormonde Terrace, NW1.

This entry was posted on July 12, 2015 by LondonUnveiled.com in Camden, Family Activities and tagged Central London, North London, view.