The Royal Hospital Chelsea ~ a Wren Masterpiece along the River Thames

The Royal Hospital Chelsea is one of the great architectural gems of central London.  With magnificent buildings designed and built by Christopher Wren, and a purpose and mission that is second to none, a visit here is highly recommended.

History:  The Royal Hospital Chelsea was founded in 1682 by King Charles II to provide soldiers with a fitting home in their retirement. King Charles II was aware that the army was supporting a growing number of soldiers who were no longer fit for active service, and inspired by Les Invalides in Paris, the king committed to create a welcoming and safe home for veterans who had fought for their country and who were now “broken by age or war”. His vision for such a home was brought to life by Sir Christopher Wren, whose elegant buildings were built on the site on the then incomplete “Chelsey College”.  Still standing today they have a majestic location on the bank of the River Thames. But it’s not just the buildings that have survived into modern times.  Charles II’s understanding that the country owes a debt of gratitude to its old soldiers informs the spirit of the Royal Hospital today. The residents of the Hospital, known the world over as Chelsea Pensioners, have all served as ordinary soldiers in the Armed Forces at some point in their lives, and now, in their later years, find a warm welcome amidst the camaraderie and banter of their fellow veterans. 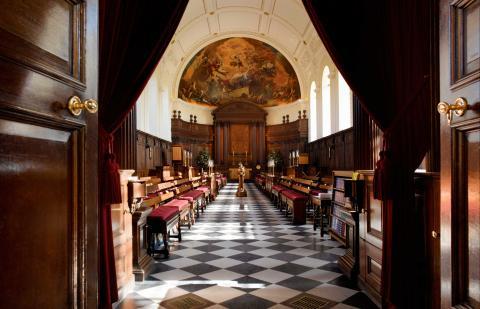 The entrance to the Wren Chapel

The Wren Chapel:  One of the architectural highlights is the Wren Chapel, built in the 1680s.  Wren was not given any constraints and was allowed to execute the design as he saw fit.  With a capacity of 500, this chapel will likely be closed to the public in the first half of 2016 for renovations.

Visiting / Tours:  There are two ways to visit - either an open unstructured visit or on an organized tour.  Tours last approximately 90 minutes and are offered at the selected time slots of 10:00 AM and 13:30 for a maximum of 40 attendees, Monday through Friday (excluding Bank Holidays). All tours must be booked a minimum of 4 weeks in advance for a minimum of 4 attendees. Individuals with less than 4 people can be added to a waiting list to join up with other groups.  If you would simply prefer to have a look round at your own pace, small groups of 10 or fewer can drop in and visit the grounds, as well as access the Chapel, Great Hall, and regimental museum during normal opening hours (10:00 to 16:30).

Shop:  The Souvenir Shop is open to the public on Monday to Friday 10am until 5pm excluding Bank Holidays and official Royal Hospital events such as Founder’s Day. 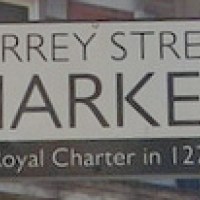